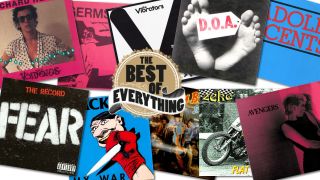 RICHARD HELL & THE VOIDOIDS – Blank Generation (1976)
CBGB’s in New York City spawned a whole rash of cool bands and all of them had different approaches. Richard Hell got passed over in my opinion, and Blank Generation is still a calling to the disenfranchised rock’n’roll youth.

THE VIBRATORS – You Broke My Heart (1977)
Besides Northern Ireland’s own Undertones, The Vibrators were the most genius pop-punk band of that whole punk rock era. If you aren’t smitten with them after listening to this one song, then… you ain’t listening.

GERMS – No God (1978)
This song was recorded on a four- track demo that the Germs did in their formative days in Los Angeles. Joan Jett produced their epic G.I. record some months later, and when singer Darby Crash died not long after, these guys became a thing of myth and spurned a rash of bands that tried to copy the Germs’ reckless abandon. It couldn’t be done though.

SHAM 69 – Questions And Answers (1979)
There was an anger and humour and ballsyness to punk music that has helped to forge many great rock bands ever since. Motörhead for one. Metallica are another. Guns N’ Roses, Nirvana and countless more. In a list of cool and off-the-beaten-track punk rock songs, this gem from 1979 has really stood the test of time.

THE AVENGERS – The American In Me (1979)
This quasi-political punk band from San Francisco pretty much rocked harder than anyone else back in 1977. The Steve Jones-produced The American In Me takes a cynical look at we Yanks at the time. Simply a classic.

D.O.A. – The Prisoner (1980)
When I was growing up in Seattle, Vancouver’s D.O.A. were like our very own Kiss. They had the most fierce rhythm section ever conceived and were a band that led the way in DIY punk rock touring. All this was before Black Flag and Hüsker Dü.

ADOLESCENTS – Kids Of The Black Hole (1981)
This Orange County band sort of led the way just before things began to get labelled ‘hardcore’. Their whole self- titled debut album is a classic, so do yourselves a favour and buy it now.

FEAR – We Destroy The Family (1982)
When Guns N’ Roses covered Fear’s I Don’t Care About You on our album The Spaghetti Inciudent?, it helped Fear come on to the radar of some rockers who may not have previously been exposed to this excellent band. Fear’s debut album The Record still gets played backstage before I go on.

BLACK FLAG – Scream (1984)
The My War record should be in everyone’s collection. Scream is a lesser-known track that epitomises the angst of Black Flag just as Henry Rollins came to the band (yes, believe it or not there were three singers before him).

**ZEKE – Chiva Knievel (1996)
**Although this was recording in the 90s, Seattle’s Zeke reclaimed the throne of real and authentic punk rock. This song is a wry and humorous look – if such a thing is possible – into the glut of heroin that was infecting that city at this particular time.

How Black Flag Changed My Life – by Casey Chaos