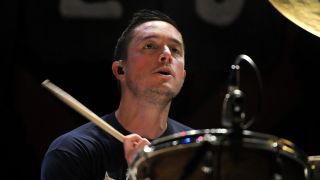 Riley Breckenridge is the drummer for Irvine post-hardcore foursome Thrice. And, as an ardent Los Angeles Angels fan, he also co-hosts the top-rated baseball podcast, The PRODcast.

The band’s latest album, To Be Everywhere Is To Be Nowhere, was released in May after a five-year hiatus. Its melodic, gravelly alt-rock marked the start of a new era for the band; their new material may be less experimental in terms of melody and time signatures than their early work, but it’s been well-received by their fans all the same.

“When you take a break for four or five years, you’re not sure if people are going to forget about you or move on to something else, so to be welcomed back this warmly has been a really cool experience,” says Riley.

We challenged Riley to select the 10 albums that changed his life. Check out his eclectic choices below…

“It’s a record that our parents had and would play all the time. It’s got Superstition on it, which is an awesome song. He’s an incredible singer and multi-instrumentalist, and it’s one of the first records I remember listening to on a regular basis.”

“This is the first record I ever bought with my own money. I went to the record store and I remember our mom and dad got pissed at me because it had an explicit lyrics sticker on, and I definitely wasn’t 18 yet. They were pissed that the record store sold me this Beastie Boys album even though I was a little kid.”

“It combined a lot of heavy, epic vocals with grungy elements and had a cool energy. It was one of the records that inspired me to start playing music. And they’re a killer live band; I remember going to see them at the Forum in LA right after their album Vs came out.”

“This was like my gateway drug into punk rock. It’s smart punk.”

“This was a huge stylistic shift and not what was expected of Radiohead. I think this is also a record that inspired Thrice to delve into experimenting with electronics and programmed drums and stuff like that.”

“This is one of the best mathy hardcore records I’ve ever heard. Botch inspired Thrice to do a lot of odd time signature stuff and experiment.”

“I can talk forever about this band. It was a big stylistic shift for them, they were like a metal band then they turned into a spacey, epic rock band, I don’t know how you’d describe it. And we got to tour with them around the time the record came out. So it was inspiring not only because it taught us how to trust our gut and make records that we wanted to make and not only what was expected of us, but we got to see them play every day.”

“It’s a one man band, super-heavy post rock stuff. That one man can create soundscapes the way this guy does is incredible to me.”

“That came out in 2001, but I didn’t learn about it ‘til John from Kowloon Walled City, who Ed and I have a side project with, was like, ‘have you ever heard this record?’ He showed it to me and it kind of affected me on the same level as Kid A where I was obsessed with it for months, I’d just play it over and over.”

“They’re not a huge band. They’re from Oakland, California. It’s kind of like Neurosis with more clean tones. They do some really cool stuff, I wish they were a more active band because I think a lot of people would like them. They’ve all got full-time jobs, one of them is a project manager or editor at UC Berkeley, one of them writes code at Adobe. Legitimate jobs. They put out a records and everybody freaks out, but they only tour for like three weeks of the year.”

To Be Everywhere Is To Be Nowhere is out now on Vagrant Records.