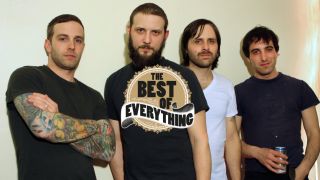 I guess I should start by saying that we toured with Cave In in 2001 as a part of the Plea For Peace/Take Action Tour. It was with them and Hot Water Music and Alkaline Trio and a few other bands, and it was right after Jupiter came out. I feel like they were at the top of their game as songwriters and as live performers and I can’t even put into words how important that experience was for us, because we were such a young band. These were our formative years, and being able to watch a band be that good onstage and that skilled with their instruments was incredibly inspiring. I don’t think we’d be the same band we are today if it wasn’t for that experience.

Before that, I think I might have heard Until Your Heart Stops, because I was into that metallic hardcore stuff, but when Jupiter came out it was a total game changer for me – personally, I put that on the same level, with regard to how it affected me as a music listener, as Radiohead’s Kid A. So being able to play shows with them and watch them play every night, they made a fan for life, and ever since I’ve obsessed over everything they’ve put out. I go back and listen to these records over and over and over and over and over again. They definitely stand the test of time.

11. CROSSBEARER (Beyond Hypothermia, 1998)
This is from their first record [comprised of early demos and split singles]. It hit me because they made these songs when they were like 15 years and it has some of the greatest shredding on it that I’d heard in a long time. We ended up recording The Illusion Of Safety and The Artist In The Ambulance with Brian McTernan, who’d recorded Jupiter for them, and he was telling us stories about them having to be driven to shows and recording sessions by their parents because they made that record when they were 15 years old and that’s an incredibly advanced record. I didn’t really do anything at 15! But there’s a really cool, youthful adventure quality to this record, where the transitions don’t necessarily make sense but that’s something that’s appealing about this record, because it’s just kids having fun and being amazingly talented.

JOINT 10. RUBBER AND GLUE/DAY TRADER (Antenna, 2003)
These two songs are both from Antenna. Rubber And Glue is an album track that I really like, and Day Trader is a bonus track that I actually heard them play at one of their shows before Antenna came out and I fell in love with it immediately. I’m kind of bummed they didn’t include it on the record. But both are just very, very good songs. In Rubber And Glue I can’t get enough of the way the vocals and the lead guitar lock in during the choruses – they kind of follow each other – and with Day Trader it’s just a phenomenal song. What they were going for, it seemed like, in that era was just this big rock sound that was almost like Failure or some of the better Foo Fighters stuff, and I feel like they were doing it so well it’s a bummer that it never really took off the way anybody hoped it would. There were some amazing songs in that era.

8. LIFT OFF (Lost In The Air single b-side, 2001)
They’ve put out so many things I can’t always remember what’s off what, but this was, I think, written as part of the Antenna sessions, and it’s got a really, really catchy melody and it’s just a great rock song. It’d definitely something that inspired me as a drummer.

7. INFLATABLE DREAM (unreleased track, c1999)
This is an unreleased song, but it’s floating around on the internet. I think it was made around the time that they were writing for Jupiter, around the Creative Eclipses time. So it’s kind of got a little bit of that Until Your Heart Stops metallic hardcore vibe, but then it’s also delving into some of the more melodic stuff that they did. I feel like Cave In have a knack for writing really incredible outros and there’s something about the guitar melody in the outro of this song that just gives me chills, and it’s got the beginning of this incredibly heavy, drop-tuned Cave In awesomeness with Caleb [Scofield] the bass player screaming his brains out. Which is another thing I love about Cave In. The recording quality’s really shitty, though. It’s demo quality, but there’s something kind of endearing about that.

6. MORAL ECLIPSE (Until Your Heart Stops, 1998)
This is the opener to Until Your Heart Stops and the guitar riff that starts this record is just so memorable. I can’t tell you how many bands I’ve seen that came out of that similar scene soundcheck and the guitarist starts playing that riff. It’s just one of the riffs. It’s so good! And you can look online for them playing this song years after they write it, at the reunion shows, and it’s just on a completely different level.

5. REQUIEM (Jupiter, 2000)
There’s almost like a Middle Eastern-inspired guitar riff that kicks in about halfway through this song. It’s a very linear song but it shifts for the second half of it, and the riff is just incredibly catchy. It was unlike anything I’d ever heard at the time. It definitely sounds like it could be played on a sitar or something. But the song goes through a bunch of different twists and turns and it’s just awesome! To see Cave In get in to more melody and more dynamics on this record and stray away from metalcore or whatever you want to call it was something I totally look up to them for doing.

4. JUGGERNAUT (Until Your Heart Stops, 1998)
There’s a section at the 1:01 mark of this song, after the super heavy metal stuff, where it’s screamed vocals with no drums and no bass and no other guitars – just one guitar and screaming vocals – and it feels like it’s setting up this part that gets even bigger and more heavy and chaotic, but it’s a total fake out, because they go into this snare roll, super spacey delayed guitar thing, and it’s as cool as cool as shit because it’s so unexpected. It’s something that I know my brother and I have referred to several times. We’ll be writing stuff for Thrice and we’ll be like, ‘We should do a fake out like this!’ You totally expect this thing to get big and the bottom drops out of it and it goes somewhere completely unexpected, and I think there’s something to be said for the emotional impact that doing that can have on a listener. You don’t always have to get bigger and bigger and bigger. There’s something about dropping out that’s really important, too.

3. JUPITER (Jupiter, 2000)
This one gives me chills every time I listen to it. The drumming on it is just phenomenal – there’s a lot of work with batons and there’s some really cool rolls. It’s just got a great feel and great dynamics. John-Robert Conners reminds me of Bonham in a lot of ways. I think he also kind of looks like him!

2. SING MY LOVES (White Silence, 2011)
This is from the most recent record, and it pretty much sums up everything about Cave In in one song. It’s got great vocals from Stephen Brodsky, awesome screaming from Caleb, it’s got another one of those epic Cave In endings that goes on and on for three minutes but I feel like I could listen to it for three hours – there’s just layers of awesome, spacey guitar stuff with really heavy undertones. It’s just brutally heavy with cool dynamics and it’s also got melody. It’s got everything. If I was going to be like ‘You should go listen to Cave In, this is what they sound like,’ I’d probably show them that song, because it encapsulates everything that they’ve done across their entire career.

1. BIG RIFF (Jupiter, 2000)
This is just the heaviest fucking song I’ve ever heard, probably. It’s just great. It’s insanely heavy, but there’s also plenty of melody. I’ve listened to this song probably 1000 times and I get chills every time. There’s also great drumming. It’s just definitely my favourite Cave In song – it’s the best song on Jupiter, and every time I’ve seen them play it live it’s just blown my mind. It’s such a good song. And I love that it’s a totally working title. It’s great!

For more information on Cave In, visit their Facebook page.

Thrice’s new album To Be Everywhere Is to Be Nowhere will be released on May 27 through Vagrant. Riley was speaking to Mischa Pearlman.