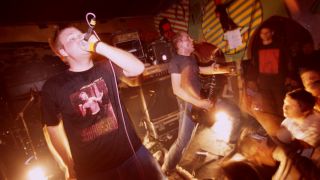 “They were the band that we all looked up to,” says Converge drummer Ben Koller. “Every time I saw that band they blew me away. I remember they travelled to Boston in the middle of winter and they could hardly get their van through the snow. No one turned up apart from a few people, because the weather conditions were just terrible and we thought there’d be no show, but they put on one of the best live performances I’ve ever seen. That whole Boston scene just saw them as the standard to aspire to.”

Considering the Boston scene that Koller is talking about was one populated by underground heroes as talented as American Nightmare, Bane, Cave In, The Hope Conspiracy and his own band, well, that is some statement to be making. So who exactly is he talking about?

Formed in 1993 in Tacoma, Washington, Botch are the band that could have, should have and, if they’d stayed together, would have become regarded as one of the most influential and ground-breaking acts of the 21st century. That they are now nothing more than a cult band proves their influence and only hints at what they were capable of.

After guitarist Dave Knudson approached drummer Tim Lantona (who was studying jazz and considering attending prestigious performing arts school Juilliard) at high school and asked him if he wanted to start a rock band, Botch were formed. Adding bassist Brian Cook and vocalist Dave Velleren to the line-up, Botch began to craft their sound through local shows and various self-released EPs. The result of their early experimentation was nine-track compilation album The Unifying Themes Of Sex, Death And Religion. This caught the attention of Hydra Head Records owner and ISIS frontman Aaron Turner, who was so impressed by their re-imagining of Carl Orff’s O Fortuna that he asked them to contribute a song to his label’s forthcoming Black Sabbath tribute album In These Black Days. Botch’s cover of The Wizard was one of the most unusual and striking songs present and, in 1998, Hydra Head released debut album proper American Nervoso.

Listening back to the record it’s almost impossible to grasp just how original Botch’s mix of hardcore, metal, jazz time signatures, oblique lyrical reference points and often wacky humour was in 1998. These days the bands they influenced have become household names within the alternative world, but here it was genuinely new. Not that this unique sound captured the attention of everyone immediately, with nu metal and ska-punk the big movements in rock at that time. This was a noise that was totally alienating to your average fan.

That soon began to change as Botch started to find more and more bands willing to embrace the kind of forward-thinking momentum that they had started. Ink And Dagger, Snapcase, The Blood Brothers and, most importantly, The Dillinger Escape Plan all teamed up to head out on tour with Botch as the movement gathered a head of steam.

Then in 1999, and only a year after their debut, Botch dropped an all-time underground classic. We Are The Romans is a phenomenal album, one that would leave even the most jaded hardcore cynic shaking their head in disbelief at the sound of every rulebook being ripped to shreds. From the opening roar of Velleren, to the quite impossible to follow drum breakdown in To Our Friends In The Great White North, to the haunting Gregorian chant that plays out closer Man The Ramparts – there’s a strong argument to be made that that We Are The Romans is one of the greatest albums in the history of heavy music.

News spread like wildfire throughout the underground that Botch, and the growing group of likeminded bands, were providing an alternative to doing it all ‘For the nookie’. When TDEP followed with Calculating Infinity the same year they brought Botch out as main support for their debut UK show in London, and it was one of the hottest tickets in music.

Chris Pritchard was there that night. He was playing in Kent hardcore band Dead Life Portrait at the time, and has since gone on to carve out a successful career in music management representing everyone from Hang The Bastard, Slaves and Get Inuit over the last decade. He remembers that gig with more than just fondness…

“[It] was the best live show I have ever seen a heavy band play in twenty years,” he says today. “It has never been matched. They made the headliners, The Dillinger Escape Plan, look weak… and that was in their Dimitri days too!”

Just as it seemed that people were to be turned on to the power and ferocity of Botch’s art it all began to unravel. Knudson and Latona stopped communicating after the creative strain of following up We Are The Romans took its toll. All the members suffered writer’s block, leaving Knudson to form the post-rock/synth-pop side-project Minus The Bear where he could use his more melodic and pop based ideas that he felt weren’t suited to Botch.

Botch officially split in 2002, then released a posthumous six track EP, An Anthology Of Dead Ends, of material that was intended to make up a third album that never came. Knudson took up MTB full time, Velleren took a few years out of the music scene before returning with Narrows, and Cook continued his excellent work in both These Arms Are Snakes and Russian Circles. Latona returned to education and has not been heard from since.

Botch’s legacy exists in many a forward-thinking hardcore or metal band, you can hear their echo in Every Time I Die, Architects, Between The Buried And Me and even early Bring Me The Horizon. And their legend continued to grow when Hydra Head released the Unifying Themes Redux compilation album and 061502 live set in 2006. But, even in a world where every bands seems so easily ready to reform, we are still no closer to seeing a return of those four musicians to take the acclaim that they so richly deserved first time around. Botch, it seems, still refuse to play by anyone else’s rules.

“I wish!” say Ben Koller when asked about a potential Botch reformation. “I see those guys around now and again. Independently of each other obviously. And I always, always, say ‘Why don’t you guys just get back and do a few shows together?’ I think it would be great. But, no luck so far. Which is a shame, because you all really needed to see that band!”