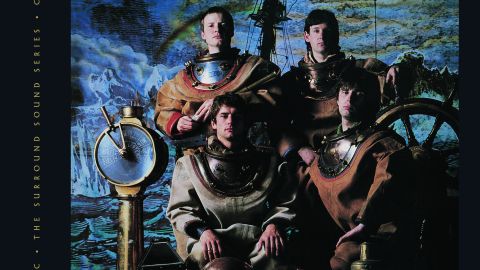 In the interests of full disclosure, and at the risk of undermining the CR reviews section’s avowed intent of critical infallibility, there was a brief time when I did not particularly care for Black Sea. On its initial release I shared a house with an XTC fan who, quite literally, never stopped playing it.

To ears attuned to the fervid brutality of the Pistols and the instinctive savant passion of Joy Division, XTC were just too clever for their own good. Every chord sounded wilfully obtuse, each brilliance-flaunting couplet merely contrived to irritate. Moving out was only a relief.

Within the week, entirely unable to dislodge the earworms, or live another second without the opening clarion riff of Respectable Street; ‘help’ of Sgt. Rock; irresistibly barbed ‘woah-oh’s of Living Through Another Cuba; the compound crescendoes of No Language In Our Lungs; or the inspiring, if unlikely, tribute to the never-never-navvies of Towers Of London – I acquired a Black Sea of my own. I had no choice. I couldn’t live without it. Irritating or not, it’s a stone-cold classic, and it still owns me more than I own it.

So 5.1-savvy prog remixer du jour Steven Wilson had better have stepped up to the plate, because when it comes to cows, there are none more sacred than this. Thankfully, 2017’s mixes of both stereo and surround variety are excellent – Wilson didn’t get where he is today by taking issue with time-honoured perfection. Aside from added crispness, clarity and positioning in the round, there are no unwelcome surprises here. However, the all-important second disc with its 5.1 mix and additional extras (videos, instrumentals, demos et al) is a Blu-ray, so won’t play in DVD 5.1 players.

Just as generous a package as you’d expect from Ape House, this is a lovingly produced definitive edition of an album you’ll undervalue at your peril. Still not getting it? Give it time.