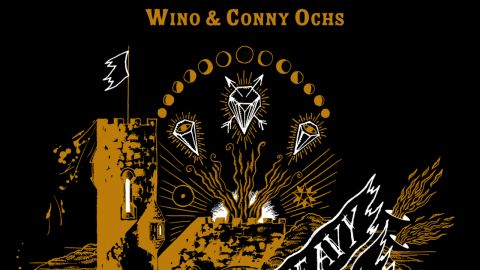 When German singer songwriter Conny Ochs supported former St Vitus heavy guitar legend Scott ‘Wino’ Weinrich on his 2010 solo acoustic tour, the two immediately hit it off and decided that they had to collaborate.

The fruits of this partnership may come as a surprise to those who have Wino neatly filed away in the section labelled ‘doom’, as the lighter acoustic sound requires no overloaded valve amps or wrecking-ball power chords.

The cover of Townes Van Zandt’s dark American anthem Highway Kind is the most obvious clue to where the album comes from: it’s the bleaker extreme of country, the stark confessional Neil Young Americana. If there’s a precedent for this album, it may be found in the murky soulful gloom of Mark Lanegan’s early solo works.

The songs are good – some like Dead Yesterday and Vultures By The Vines are pretty outstanding – though you have to wonder how many bong-hardened Spirit Caravan types are going to rush out to buy this, other than to add to complete their collections.

That said, this is hopefully the beginning of the fruits of a great partnership, not a one-off ending.