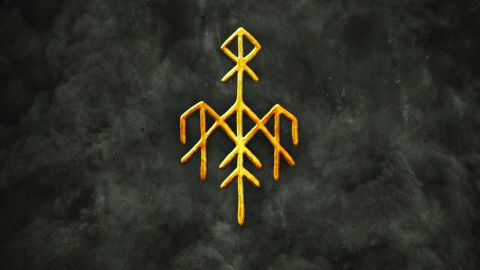 What began 13 years ago as a personal journey into Norway’s past for Einar Selvik has culminated in renewing interest in the ancient Norse culture of his homeland on a national level – no small achievement, and further, on an international level as part of the soundtrack to the History Channel drama Vikings, upon which Einar has also cameoed.

Earlier this year, he and Enslaved’s Ivar Bjornsson released their triumphant Skuggsjá collaboration, a commemorative piece commissioned by the Norwegian government on the 200th anniversary of the signing of their constitution.

He now returns soon after with the final instalment of Wardruna’s rune trilogy, a project a long time in the making, some of the tracks dating back to 2003, when Einar was drumming for Gorgoroth. Fittingly, for an album named after the end of the world, grim portent hangs thick in the air of Ragnarok’s opening track Tyr, marching to a solemnly militant beat amidst a proud warrior’s chorus; but rather than the fire and blood you perhaps might expect, the album on a whole instead explores themes of rebirth and renewal from the ashes, expressed through the complementarily gracious and emboldening choirs of driven masculinity, nurturing femininity and the nascent vitality of youth, the rousing and purposeful Odal featuring Einar’s children and the Skarvebarna children’s choir.

As with previous instalments 2009’s Gap Var Ginnunga and 2013’s Yggdrasil, there is a primal vitality to tracks such as the spellbinding Isa, a showcase for perhaps the record’s greatest triumph among many: the drums. Simplistic, yet irresistibly engaging patterns that form the spine of the record, Einar has refined his writing process over the years to create accessible musical paths into ancient mythologies past. There is an earthen tangibility to them, conjuring palpable sensations of the sticks’ smooth woodgrain, the drum’s taught hide, a direct, powerful connection between music and nature expressed in a uniquely profound manner. Where similar musical endeavours may risk sounding corny to cynical modern ears, the authenticity and sincerity alive in every note of Wardruna adds a deep spirituality to music that may well feel culturally alien to some, but resonates with an ancient essence within us all.