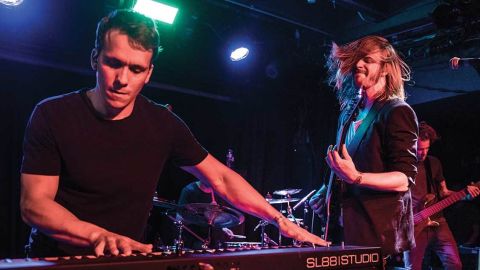 Tonight’s line-up could be billed as Prog: The Next Generation, featuring four young bands offering their own takes on the genre. Novena merrily mash together death metal, with growls erupting from the hooded Gareth Mason, and grand, melodic passages sung by Haken’s Ross Jennings.

The compositions might be epic, but there’s a playfulness too, with drummer Ray Hearne sporting a hi-vis vest and witch’s hat. With seven-string guitars and deep droptunings, Bristol’s Valis Ablaze inhabit the same segment of prog’s spectrum as TesseracT. Lost In The Syntax boasts a crunchy djent riff and Kieren Hogarty’s slap bassline kicks on the pummeling Persuasion. Phil Owen’s voice does occasionally thin out when reaching for the highest notes, but there’s drama aplenty in the dips and swells of their performance.

The crowd peaks in size and enthusiasm for London’s Sümer, who absolutely nail it. They kick off with Progenesis, and, with a tripleguitar onslaught, it’s not so much a wall of noise as an all-enveloping tidal wave. The set draws primarily from 2014’s The Animal You Are. Guitarist/singer Ian Hill apologises for “all this old shit”, but nobody seems to mind.

Pinch, Cut features a crushingly heavy breakdown, while the instrumental 9 is a kaleidoscope of swirling guitar lines underpinned by Toby Bonney’s rampaging drums. They finish with End Of Sense, which builds, drops, then builds again to reach gargantuan size, receiving the loudest reception of the night.

In his white T-shirt, jacket with sleeves rolled up and mane of blond hair, Vola’s frontman Asger Mygind could have stepped out of 80s cop show Miami Vice, but the band’s sound is distinctly contemporary. The Same War sets out their stall. From the opening djent battering, it lifts off into wide-open skies in the verse, before Felix Ewert’s nimble drum break leads them back to the riff crunching. The band are fond of exploring polyrhythms as Ewert holds a groove, allowing Mygind and bassist Nicolai Mogensen to morph subdivisions over the beat, as they do in Black Box, from 2011’s Monsters EP.

Your Mind Is A Helpless Dreamer sees Martin Werner dancing behind his keyboard, inspiring a singalong from the audience. The gentle Emily is introduced as “a short, quiet tune”, but Mygind reassures the crowd that “after that it will be a heavy one, so you don’t have to worry”. Owls is a highlight with its fat bassline, and the climactic Stray The Skies inspires a mosh pit.

It’s a different audience to those of bands like Lifesigns or Touchstone. Drop-tunings and djent breakdowns are now part of the prog scene, and bands like Vola are among the most energising, exciting groups around.