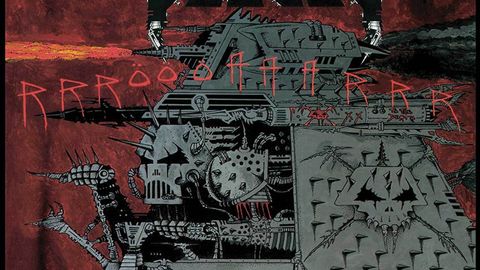 The influence of this Québécois band is as wide-ranging as their multifarious styles. Artists as diverse as Opeth, Foo Fighters and Knifeworld have spoken of the debt they owe Voïvod. The Noise Records period covered here (1986-’88) nurtured the band from sci-fi obsessed thrashers into sonic scientists fusing hardcore punk with Krautrock and the dark prog of VdGG, King Crimson and early Pink Floyd.

Rrröööaaarrr from 1986 is a raw, blistering bash around the ears. Sure, it sounds primitive compared to the complexity they were soon to spawn, and with titles like Fuck Off And Die and Slaughter In A Grave, it’s infantile but drafts the blueprint for later masterpieces. Guitarist Denis D’Amour (aka Piggy) jettisoned the metal power-chord rule book out the airlock in favour of extraterrestrial chord voicings informed as much by Stravinsky as by Fripp. Thrashing Rage and Ripping Headaches illuminate the way ahead.

The follow-up Killing Technology was a hyperspace jump away. Greater production values and further mutation of those fabled ‘Piggy chords’ combined in an early progressive metal milestone. The title track and Forgotten In Space exhibit an evolution in lyrical content too – cautionary tales from the cold war era of the nuclear shield and dissent against totalitarianism. Away and Blacky’s rhythm section gained definition – what was once muffled thunder became precision-guided tactical strikes. Snake’s sidewinder vocal melodies inexplicably undulate a course through the disharmonic chaos coalescing the discordance into his tractor beam.

The conceptual Voïvod character, a vampiric warlord, had shifted his campaign from the post-apocalyptic theatre of Rrröooaaarrr into the galaxies and then to a quantum realm: Dimension Hatröss. The 1988 concept album is their creative apogee and recognition came thanks to airplay for lysergic videos accompanying Tribal Convictions and Psychic Vacuum.

The audio has been sourced from original master tapes and finally the full spectrum of this visionary band’s work can be appreciated as it was meant to be. Each set is accompanied by a bonus CD containing the Montreal date on the respective tours, plus a DVD of audio-visual material from demos to fan‑shot gigs and slideshows. A separate two-CD sampler, Build Your Weapons, compiles the best of the fledgling era.

The Voïvod mythos would continue through seismic stylistic shifts, personnel changes, Piggy’s tragic death in 2005 aged just 45, reformation, reappraisal and resurgence. These releases document the growing pains of perhaps the most innovative progressive band the metal world has produced.