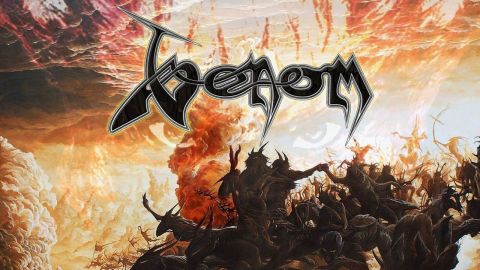 Venom’s Welcome To Hell and Black Metal albums spawned almost every variant of extreme metal that at least some of us know and love today.

There’s a case for tracking all of the new progressive metal back to At War With Satan, an album generally regarded as a failure but one in serious need of reappraisal. Without them, no Reign In Blood, no Ride The Lightning, no black metal, no thrash. Yes, we owe it all to Venom, and each night we ought to sacrifice a black cockerel to them.

Unfortunately none of the many reunions or new line-ups of Venom have ever equalled the madness and ferocity of those first albums. Now the Cronos-led trio have signed with Finnish metal imprint Spinefarm and recorded their 13th album after extensive touring.

It’s good, but certainly not an album that will spawn genres and inspire future superstars. It’s heavy, funny and has some good songs, such as Hammerhead, the title track and the pulverising Punk’s Not Dead, but in truth it’s really a bit characterless.

It doesn’t disgrace or demean their classic work but it hardly adds to it either. You feel like a twat for expecting anything more.