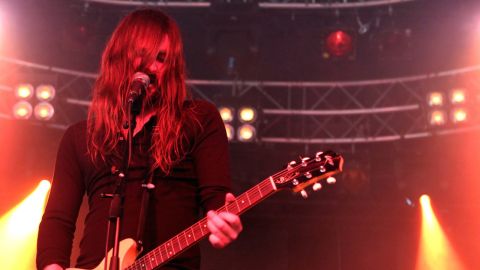 Manson-obsessed Cambridge four-piece Uncle Acid & The Deadbeats continued their meteoric rise to stardom with two sold-out shows at The Roxy, less than four miles from the infamous Cielo Drive, to end their first US tour. We turned on and tuned in, and here's five things Charlie told us...

“I got a motorcycle and a sleeping bag and ten or fifteen girls. What the hell I wanna go off and go to work for?”

Indeed, and it’s a holiday tomorrow, Columbus Day and, with cruel irony, Native American’s Day, so this capacity crowd has that long weekend vibe, many of them here for both nights. As ever, for the better rock shows on the Sunset Strip, there’s a row of motorcycles outside, but, perhaps more tellingly, there’s one of those old Oakland-style choppers, the kind that feature so heavily in Uncle Acid’s videos. In such close proximity to the aforementioned Cielo Drive, and with the perfect backdrop of freaks and longhairs in the warm night air, the band also known as the Sharon Tate Experience must be loving this.

“A long time ago being crazy meant something. Nowadays everybody’s crazy.”

And everybody’s in a rock band, but it takes a special band to mean anything these days. The Deadbeats are well aware that it’s all been done before, mostly better, so instead they revel in that, paying homage as much to a time as to its music. Rather than being influenced by a band, they’re influenced by an era, or at least the romantic myth of that era. Of course, there’s a lot of Black Sabbath here, but there’s Canned Heat, too, and old Hells Angels movies on VHS, worn out through playing. In a way, Uncle Acid is the re-imagining to the soundtrack: no band sounded like this back when being crazy meant something, but they damn well should have.

“Getting up every day and going through this again and again is hard.”

Admittedly Charlie was probably talking about prison here, but it’s difficult not to feel for Deadbeats guitarist Yotam Rubinger who has apparently been in hospital all day throwing up blood. Understandably he barely moves on stage, rooted to the spot, but then this isn’t a band that needs to be particularly animated, it’s more about that driving groove in songs like Mind Crawler which is almost trance-like, and has every head in the building nodding in unison. It’s not like you can see the band anyway, all backlit and hidden behind hair, but it says a great deal that they played at all.

“The way out of a room is not through the door. Just don’t want out. And you’re free…”

Obviously the way out is through the door, but only a fool would leave. As it is, this nine song set, a fairly even mix of tunes from 2012’s Blood Lust and last year’s magnificent Mind Control, feels disappointingly short, and there’s a collected “Is that it?” when they’re done with the main set. In fact, both Mt. Abraxas and 13 Candles are a good seven minutes long, a road-trip by the standards of airplay, but, illness notwithstanding, this still feels more like an opening set, like someone needs to tell Uncle Acid he’s headlining. All quality, but not enough quantity.

“If you’re going to do something, do it well. And leave something witchy.”

For a band that’s been described as “celebrating the Summer Of Love’s soul-chilling autumn”, this is, as has been mentioned, ground zero for Uncle Acid & The Deadbeats, no less than ten minutes drive from the place where it all turned dark on August 9, 1969. As such, there is no more impressive way to finish than with the Devil’s Work, paraphrasing the words that were spoken that night by a man named Tex Watson: “I’m the devil and I’m here to do the devil’s work.” Seriously, it’s phenomenal, spine-chilling, ominous… a perfect moment in time. Is that witchy enough for you, Charlie?