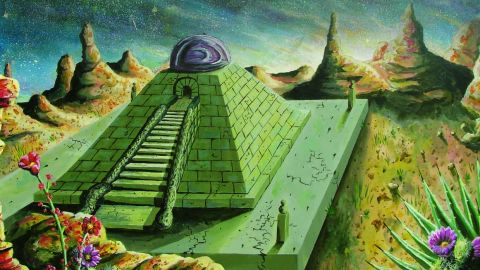 If it sometimes seems that modern prog lacks a certain, let’s say, attitude, here’s a band with bags of the stuff. Them Moose Rush hail from Bjelovar in Croatia and blimey, are they feisty. Singer/guitarist Nikola Runjavec sounds like Mike Patton on helium, and gives off an exuberant if slightly scary vibe, like the strange kid in the playground inviting you behind the bike sheds to play with matches. The irreverent, offhand inventiveness of Faith No More is actually not a bad reference for these guys, but their restless math/prog/metal sound is very much their own. Damudu Honey starts with a tension-building Morse code riff before morphing into a bad-trip groove. Anoie begins as Floydian space rock before exploding into an urgent new shape. Dreydribble has enough fretwork fireworks to keep any tech metal fan happy. Radio Violence is a great big slap in the face of a riff and a rant against bland FM programming. Resistance is futile as bizarre comparisons keep popping up: one minute they’re Jeff Buckley jamming with the Cardiacs, the next they’re Jane’s Addiction fighting King Crimson. The title says it all: snotty, stupid and clever in equal measure.