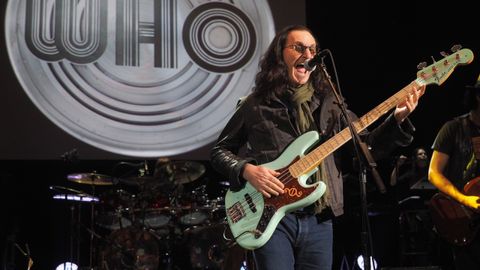 When is a Who gig not a Who Gig? When the singer is Eddie Vedder… and Joe Elliott. And The Strypes. And the fella from the Kaiser Chiefs and hip hop brats Rizzle Kicks. The idea is simple: get a load of famous singers to front a sort of The-Who’s-Greatest-Hits set, with Chris Evans MC’ing, all in aid of Daltrey’s Teenage Cancer Trust. High-end karaoke? Yep. But tremendous fun with it.

Daltrey was there. But Townshend wasn’t._ _The singer introduced the night with a moving, Shane Meadows-directed short film about the charity’s work, and closed the show with Substitute and Young Man Blues. There was no sign of his old oppo. “Pete’s at home, feeding the dogs,” joked Daltrey. But Townshend was ably depped by his own brother Simon and Frank Symes – and, on The Kids Are Alright, a rapturously-welcomed Wilko Johnson.

**Geddy Lee flew in especially from Canada. **The Rush man stepped up to the plate for a lovingly respectful version of The Seeker. The fact that he was sandwiched between Sheila Ferguson of The Three Degrees (doing a decent Tina Turner impression on The Acid Queen) and US singer-songwriter Leslie Mendelson (blowing harmonica on Baba O’Reilly) showed just how random the night was.

Love him or hate him, Liam Gallagher has charisma to spare. ** **He might have been wearing a coat that looked like an unerected canvas army tent, but Gallagher Jr very nearly stole the evening in three minutes. Snarling his way through My Generation like he was offering out the whole of the venue. The fact that he couldn’t even be arsed to stutter only added to the insouciance of it all.

**The winner of the unofficial Best Scream Award was a close call. **The night’s marquee name was confirmed Who devotee Eddie Vedder, who served up Naked Eye, Listening To You and Won’t Get Fooled Again, the latter finding him easily matching Daltrey’s original, ear-drum rupturing howl. But hats off to Joe Elliott – the Def Leppard man manfully tackled Love Reign O’er Me, barely flinching at the bit that required those almighty screams. It’s a tough one, but the Yorkshireman gets it…

_Find out more about The Who’s involvement with the Teenage Cancer Trust. _