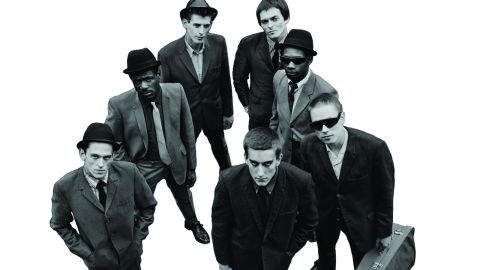 Produced by Elvis Costello, The Specials’ debut album was released on the band’s organist and main songwriter Jerry Dammers’ 2-Tone label, a kind of English Stax where black and white kids (The Selecter and, briefly, Madness and The Beat) would control the direction and output, and the major label backers, Chrysalis, would keep a respectable distance.

A collision of Jamaican ska and lead guitarist Roddy ‘Radiation’ Byers’ nuclear Johnny Thunders licks, Specials (10⁄10) originally kicked off with A Message To You, Rudy, a cover of Dandy Livingstone’s ’67 rocksteady nugget. This reboot (re-loafer?), opens with the band’s first 45, Gangsters, recorded as The Special AKA and omitted from previous pressings, and comes with the essential live Too Much Too Young EP and a blistering BBC-recorded live show at the Paris Theatre, London from December ’79. As a live unit The Specials had no equal.

The follow-up dropped in 1980… but if the white-socked peanuts who’d gone a bundle on the first record were expecting a repeat performance, More Specials (7⁄10) soon put their gas at a peep. Opening with a sarcastic run-through of Prince Buster’s Enjoy Yourself and closing with a weary reprise of the same track, this feels more like a mix of great 45s (Do Nothing; the superior “Ice Rink String Sounds” version is included here), enjoyable filler (Sock It To ’Em J.B., a horn-driven list of Bond movies) and Dammers’ groundbreaking nightmare visions of the decade to come (Stereotypes/Stereotypes – Pt. 2 and International Jet Set). There’s little gristle; it just doesn’t feel like anyone was in charge.

Racial harmony had always been at the root of Dammers’ philosophy and label. Roddy Radiation later summed up The Specials in three words: “Black. White. Band.”

With the release of 1984’s In The Studio (7⁄10) (offered here with a Peel session and a bunch of instrumental versions of the album tracks), only Dammers and drummer John ‘Brad’ Bradbury remained from the original lineup, but the boss was as determined as ever to get in the listener’s face with the zero-compromise Racist Friend (“now is the time for your friendship to end…”); the self-explanatory Free Nelson Mandela; and The Boiler, an astonishing performance by ex-Bodysnatcher Rhoda Dakar as a woman with crippling low self-esteem who ends up being raped by her dream man.

The message to you is: if all you know is Ghost Town, you’re in for a real education./o:p