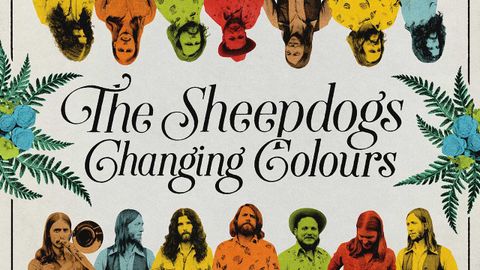 Thanks to an unlikely Rolling Stone cover feature that rescued them from debt and problem drinking, Canada’s Sheepdogs have done pretty well in modern times. Even so, you suspect the five-piece would rewind the clock to their cultural sweet-spot of the early 70s in a heartbeat.

The title Changing Colours title refers to new influences stirred into the band’s boogie-rock palette that drove 2015’s acclaimed Future Nostalgia, but the controls stay welded to a retro sound that few do better.

Opener Nobody could be a great lost West Coast session, all brown-sounding guitar chords and fuzz-headed organ.

Just as irresistible is the uproarious I’ve Got A Hole Where My Heart Should Be, and Saturday Night with its roistering groove and clanking twin guitars (a recurring theme the band call “guitarmony”).

Risks are taken, and pay off, such as the louche, Havana sway of The Big Nowhere and the soul bag of I Ain’t Cool, while you fully expect Phil Lynott to strike up on Kiss The Brass Ring.

A spot of editing would have been wise, with a glut of instrumentals costing the 17-track collection some focus. But further acclaim surely awaits, and these dogs deserve their day