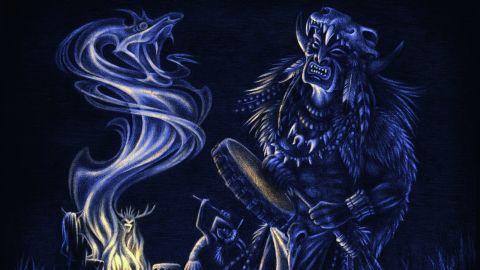 It’s all there. It’s just when Exuvia’s central piece reaches a boiling point that you finally see it. Yes, that one door, light, astral plane or whatever you want to call it that Alexander von Meilenwald, The Ruins Of Beverast’s sole proper member, has been seeking all his artistic life. For the previous five minutes, the guitars have been obsessively twirling around the tribal drum pattern and you can almost envision the musicians performing with their eyes closed and dancing. Like a traditional Indian raga, motifs are repeated over and over until all the instruments seem to mash into one, leading to a trance where all of a sudden an angelic female voice solemnly extends her hand, inviting the listeners to cross the threshold… only to let it all crumble a second later under a crude barrage of barbaric death metal outbursts and blastbeats.

In little less than 15 minutes, The Pythia’s Pale Wolves embodies TROB’s desperate spiritual quest: Alexander’s attempt to find a way back to the material world. Each of his albums have been musical diaries where hope alternates with despair, symbolised by near-ambient interludes and epic doom parts whose overall delicate and grandiose façade is often sudden disfigured by sudden outbursts of violence. Unlike its predecessor, 2013’s Blood Vaults, Exuvia isn’t an actual concept album per se but nevertheless revolves around different tribal cultures, the album opening with a Native American invocation. Once again, as with his former band Nagelfar, Alexander is quite demanding with his listeners and doesn’t make it easy on them. With only six tracks and an overall running time of running time of 68 minutes, Exuvia is indeed massive in all senses of the word, and shouldn’t be approached lightly. Either you let it swallow you all in one go either you stay the fuck away from it but there’s no in between. Some musical references points might be Wildhoney-era Tiamat, Type O Negative’sbleakest thoughts or Esoteric’s wall of sound technique, but when you look at the whole ensemble, those parallels feel quite useless because no one sounds like The Ruins Of Beverast. And maybe no one dares to tread where they lead.