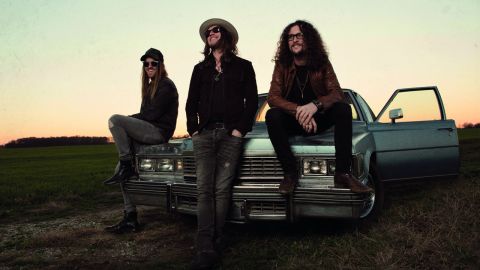 For a nation without a real ‘country’ scene of its own, the UK has developed a healthy taste for countrified rock. But one group in particular have bridged the gap between sun-kissed country tones and harder stuff; pleasing the (largely older) Skynyrd aficionados and younger rock listeners.

Enter The Cadillac Three, three Nashville-fried school friends, formerly known as American Bang (the ill-fated result of a frustrating tenure with Warner Bros Records) before going independent and merging country roots with the heavy venom of a young Metallica. Their self-titled debut came out in the US in 2012 and they’ve toured it ever since, including regular UK gigs and increasingly big venues. Consequently, a sizeable audience now knows their songs well.

Established and popular, TC3 seemingly had two choices with their second LP: stick to a formula that they know goes down well, or do something different and potentially disappoint those expecting heavy hoedowns and tales of whiskey and women. What they’ve actually done is both, by capitalising brilliantly on their collective songwriting expertise.

Chunky but not over-egged at 14 tracks, Bury Me In My Boots is packed with honed tunes, new ideas and loveable old tricks. Certain songs are familiar – live singalong The South, for example, and beloved ballad White Lightning – but this doesn’t prevent it from being one of the most successfully ambitious rootsy records we’ve heard in years, faithful to their Grand Ole’ Opry origins yet varied and forward-thinking.

TC3 are big fans of Tom Petty and Bruce Springsteen, which is clearer on this record than ever before. The excellent Buzzin’ and the gently stoned Ship Faced mix cerebral cowboy roots with radio-friendly catchiness. There’s a spacious, modern blue-collar feel to This Accent (if Brian Fallon plugged in a bit more and came from Tennessee, he might have produced something like it), while single Grafitti is so indebted to The Boss it virtually has its own denim.

Thankfully none of this is at the expense of their dirtier side. Slide scuttles in like a merrily hammered rodeo champion; Hot Damn is all sex, sex and more sex (‘Girl you put the bang in bangin’ etc); and the likes of Peace, Love & Dixie offer the kind of groovy swagger to get the most reserved listeners up on tables throwing shapes.

Matured without losing out on hip-shaking likeability, Bury Me In My Boots proves that The Cadillac Three are more than a one-album affair. It’s a generous slice of southern class from a band worth sticking with.