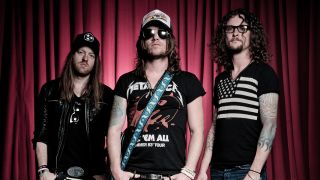 They first appeared on our radar in 2013, armed with the southern-battered rock’n’roll of Tennessee Mojo.

Dripping with whiskey – and more odes to the south than the Grand Ole Opry packs in a year – it was a vital, countrified injection for 21st-century rock. Lapped up by listeners on both sides of the pond, it helped them win Classic Rock’s Best New Band award in 2014.

But as singer/guitarist Jaren Johnston tells us, there’s more to the Cadillac Three than trucker caps and southern clichés. Not least thanks to the writing experience the trio have gained through publishing deals outside the band. Recorded (mostly live) at Nashville’s Sound Emporium, with some parts recorded in their tour-bus studio, their second (as-yet untitled) album looks set to capitalise on these new experiences.

“We didn’t wanna always be that band that just plays a heavy southern riff,” says Johnston. “The record’s gonna sound similar to Tennessee Mojo [in some ways]; it’s still me producing most of it. But I think the songwriting has gotten better, more mature.”

If early taster Graffiti is anything to go by, then there’s been a lot of Springsteen on the TC3 stereo lately. Written by drummer Neil Mason, it was intended for another artist – until he played it for Johnston on the bus one night. “I was just like, no way are we giving that away!” he laughs. “But yeah, it has more of that Springsteen, Brothers Under The Bridge kinda vibe.”

As CR went to press, the band were combing through 17 songs to choose the strongest ones. A possible appearance from Aerosmith’s Steven Tyler was also on the cards, after he joined the band on stage for a blast through Sweet Emotion.

They still listen to “the same shit” (“a bunch of southern rock, Springsteen, Neil Young, Tom Petty…”), the difference is that they’re now channelling it into something more arena-friendly. “Everybody wants to be that big arena rock band,” Johnston says. “So we’re trying to grow in a way where it makes sense.”