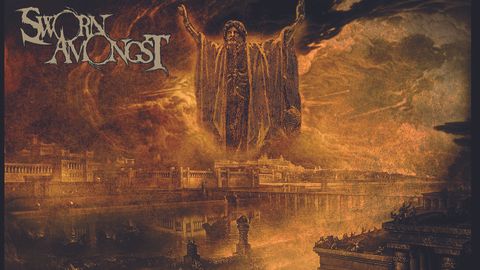 Five years after the well-received death/thrash assault of Severance failed to catapult the Hull quintet to the heights they deserved, Under A Titan Sky is a radical departure.

Though the intervening years have seen Sworn Amongst deploy a more modern hardcore sound, the initial reaction to the precise, downtuned Wraith is shock, the album sounding far more like After The Burial and Heart Of A Coward than Pantera and Death. The trend for dense, palm-muted guitars, angular breakdowns and intuitive rhythms are heavily utilised on the likes of Degradation, Genesis and the bounce of the title track, while frontman Sy James’s vocals have mutated into a belligerent, bulldog growl.

However, the band haven’t forgotten their roots, as the blistering riff of Ruins Of Our Own Construction pierces the speakers, while Jonny Barker’s lead work is impressive. Jonny Harper’s percussive onslaught never lets up while The Resistance’s anti-religious spite is steeped in metal’s nonconformist attitude.

Though Sworn Amongst could be accused of jumping on the bandwagon, the conviction and quality on display proves their worth.