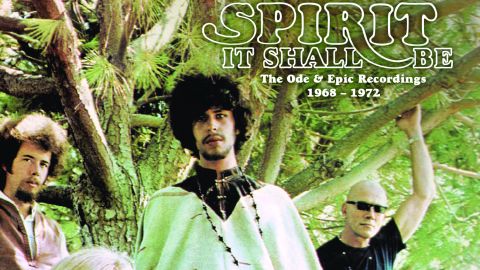 The teenage Randy Wolfe must have had an inkling he wasn’t destined to have the luckiest of careers from the moment Jimi Hendrix told him that he would henceforth be known as Randy California. I mean, your name is Randy Wolfe and that’s not considered unequivocally ideal for a rock guitarist? When Hendrix left Jimmy James And The Blue Flames for England, Randy’s parents insisted he reject the offer to go along, and instead finish school.

At 16 he bounced back, joining Spirit, and the rest is the best kind of rock history – a band of flickering genius, drug-fuelled despair and scant commercial success who can lay claim to own the patent on words like ‘legendary’ and ‘cult’. As bassist Mark Andes has said: “Our reputation as an idiosyncratic psychedelic jazz group meant we were influential rather than successful”.

This five-CD box set gathers everything Spirit released in their pomp: their first five albums, plus the soundtrack to the 1968 film The Model Shop. There are also out-takes, demos and alternative mixes from 1991’s Time Circle compilation.

Spirit aficionados won’t need telling just how boldly the band warped the West Coast sound of the era, with Ed Cassidy – drummer and Randy California’s stepdad – having played with jazzers Art Pepper and Roland Kirk, and keyboard player John Locke the son of an opera singer. To newer ears they’ll seem like Love with (even) more interesting tangents, or The Doors with a lighter, less self-regarding touch. California didn’t write much at first, but his guitar playing always darted ahead of expectations.

Right from 1968’s self-titled debut album they’re left of centre, jagged on the track Fresh Garbage, tuneful on Topanga Windows. Following that, The Family That Plays Together gets a line on bringing their strands into a whole; Clear (using some ideas from the film soundtrack) is patchy and rushed (although Cold Wind is a beauty). It’s 1970’s Twelve Dreams Of Dr. Sardonicus where, produced by Neil Young’s ally David Briggs, they coalesce into a platonic ideal of psychedelic rock, with songwriting and sound marrying into magic. Fall-outs ensued, but this was their pinnacle, a rival to Love’s Forever Changes and now a capricious classic.