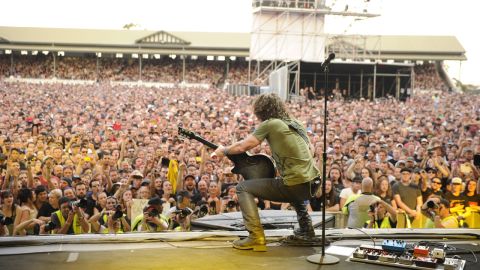 It’s all about that mournful wail, tonemaster Kim Thayil brandishing his guitar like a slow-burning torch clearing away decades of over-complication and taking the transfixed throng back to the Brummie sound that started it all. But if Soundgarden ever owed a debt to Sabbath then they amply repaid the world with tunes that – over twenty years on – still have the power to tingle spines and hold generations of Aussies captive.

The growling throb of Outshined has already cast a spell over this Aussie crowd that’s only broken by the metallic chug of Rusty Cage, a high-point in a classic setlist that confirms Soundgarden’s rightful place in the pantheon, and suddenly it seems not so long since sensational so-called Seattle sound swept the world and left an indelibly changed one in its wake.

Tonight it’s easy to understand why, and there are new tunes, too, Time Flies sitting comfortably in a sterling set only tarnished by the tendency of such bluesy psychedelia to convert into a distorted wash anywhere other than directly in front of the big speakers.

It isn’t enough to overpower Chris Cornell’s supernatural range, an instrument he wields as deftly as the as the musicians around him, but as the forlorn sway of Black Hole Sun casts a shadow over the crowd it’s hard not to wonder at the strange proceedings taking place list next door as white drapes begin to emerge on the stage where Faith No More are soon set to headline. Stirring stuff.