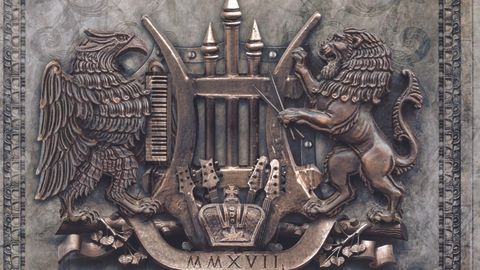 Thunder roars. Lightning crashes. Sitars ring. A harp cascades. There’s wild soloing, strings borrowed from Led Zeppelin’s Kashmir, and a riff that sounds like the kind of music that might accompany Zeus on a late‑night trip to the all-night garage. We’re just two minutes in, and the debut album from Sons Of Apollo is proving to be unflinchingly epic.

Put together by drummer Mike Portnoy, bassist Billy Sheehan, guitarist Ron ‘Bumblefoot’ Thal, former Journey frontman Jeff Scott Soto and Portnoy’s old Dream Theater cohort Derek Sherinian, Sons Of Apollo are men whose rock family tree has steadily grown into a fully fledged forest. And as they leap nimbly from supergroup to supergroup, it’s tempting to wonder if this is a blueprint for rock’s future: find musicians of repute who work quickly, rattle out an album, then embark on a one-off, coffer-swelling tour (we’re promised that SOP will spend 2018 “touring all over the world”) before moving on to the next project. And, a few quibbles aside, why not?

Psychotic Symphony is very much the sum of its parts. The musicians are as good as you’d expect, especially Portnoy, who almost seems to drag the rest of the band along with him, and Thal, whose playing veers from ugly metallic crunch to stunningly fluid solo. Labyrinth starts with urgent, staccato strings, is joined by a subtle, stuttering riff that sounds like a sped-up version of AC/DC’s For Those About To Rock, proceeds with a frantic section similar to the Hyperspace movement of Rush’s Natural Science, and climaxes with the kind of keyboard swells that Tony Banks had perfected by the time mid-period Genesis rolled around. Signs Of The Time begins with a riff plucked straight from the Gojira playbook before noodling its way towards jazz rock nirvana. Divine Addiction could be Perfect Strangers-era Deep Purple, while the middle section of Coming Home is like the mid‑point of The Who’s Won’t Get Fooled Again rewritten for anyone unfamiliar with the original.

Everything sounds like a celebration of rock music, a tribute to rock music and, often, an affectionate, metallic approximation of rock music originally made by other people. These hat-tips are usually quite sly, and by the time you’ve noticed, the band have moved on to something entirely different, and it really doesn’t matter. Psychotic Symphony is fierce, loud, bewildering, brilliantly performed and monstrously entertaining.