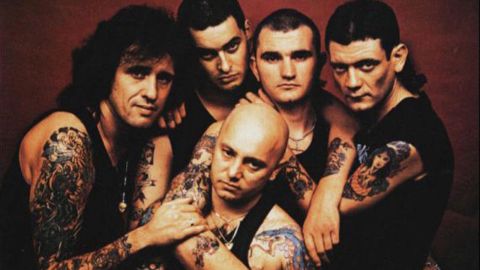 On the cover of 1982’s Rose Tattoo’s Scarred For Life (6⁄10), the five members of the band are staring at the camera with looks that seem to ask: “Did you spill my pint?” This, really, is all you need to know regarding the songs that comprise the Sydney group’s first four albums, now reissued.

At their best, Rose Tattoo’s sound crackles with an electricity redolent of dangerous bogan bars in dusty Australian suburbs; places where the threat of violence is never far from the surface and only the toughest of cookies will make it out unscratched.

When the group mine this groove, as they do on their most famous song, Nice Boys, it’s easy to appreciate the influence they had on bands such as Guns N’ Roses. The trouble, really, is that Rose Tattoo lacked the artistic vision to progress from this febrile starting point. Come 1984’s Southern Stars (4⁄10), the group’s routine had become just that, and, worse still, had begun to sound even a little reactionary, as best evinced by The Radio Said Rock’n’Roll Is Dead.

Although the group eventually ran out of steam, the energy and almost homicidal conviction running riot through the earliest part of their career is something to behold, even when translated to sketchily recorded albums now two generations old. Here Rose Tattoo are a force of nature, and a powerful one at that.