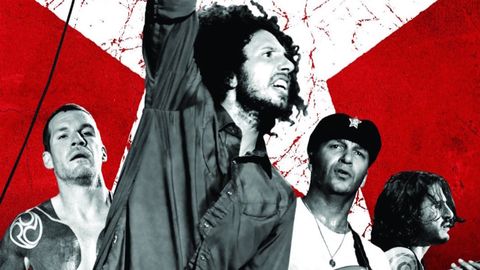 “Fuck Simon Cowell!” chant 40,000 frenzied maniacs in unison; if SiCo ever thinks he’s unpopular for not giving some warbling soul bozo a chair on his bollocks TV show, he should’ve been in Finsbury Park on June 6, 2010.

This was The Rage Factor, RATM’s free-gig thank you to the million-plus Facebook-rallied chart insurgents who snatched the 2009 Christmas No.1 from X Factor winner Joe McEldery and handed it to Killing In The Name in what the narrator calls “the biggest David versus Goliath in pop history”.

Rage, at their most ferocious, make this party about more than just a legendary rock fightback, though. Bounding vehemently through Testify, Bombtrack and Township Rebellion, Zack de la Rocha spits passion politics about warfare, genocide and the Gaza blockade like a rap-rock Guevara while Tom Morello plays demented solos on the pick-up switch of a guitar scrawled with ARM THE HOMELESS.

They honour the spirit of punk with a cover of The Clash’s White Riot, and bring the Facebook campaign originator on stage to present them with a charity cheque for £162,000 – the full proceeds of the single – but Morello nails the sentiment of unity and rebellion with eight simple words: “Fucking up the system never felt so good.” A monstrous roar of: ‘Take that, Cowell.’