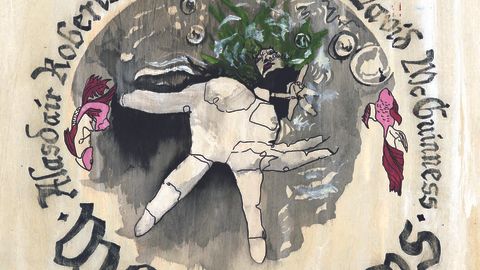 An unreleased track by an undisputed progenitor of British folk demands top billing. Shirley Collins’ romantic declaration Wondrous Love completes the soundtrack of Tim Plester and Rob Curry’s fine documentary on this anchor of English song, The Ballad Of Shirley Collins (Earth Recordings), which plots her emergence, years lost to dysphonia and her return. It also accompanies Collins’ new autobiography, All In The Downs: Reflections On Life, Landscape And Song.

Scottish adventurer Alasdair Roberts continues the work in his own name that followed initial years as Appendix Out. What News (Drag City), in collaboration with Concerto Caledonia director David McGuinness and sonologist Amble Skuse, keeps the focus on history, but this time with keyboards at the core. He visits Scottish ballads learned from such singers as Betsy Whyte, Duncan Williamson and Alasdair’s own late father, Alan. It’s a winning approach with beautifully textured sounds, some from an 1844 grand pianoforte or a 1920s Dulcitone, while Roberts’ characterful vocals complement many a time-worn tale about the likes of Young Johnstone and Clerk Colven.

An album by a singer-sitarist who’s also a scientist, neuro‑philosopher and actor, and dons wearable Mi.Mu gloves to trigger sounds by movement, is likely to be acutely cutting-edge. Such is Shama’s Truth Be Told (The GungHoDown), a globe-straddling collage set on a bed of both Indian and Western songcraft. A three-part philosophical treatise based on the work of Sufi poet Rumi, it blends singing with poetry, hip-hop culture with sitars and Afrobeat with jazz. The sonic panorama stretches as far as the listener’s imagination, and then some.

Luke Daniels has revelled in restless sonic experimentation for two decades, variously as a melodeon accompanist and in Cara Dillon’s band, then on many an album in his own name. The latest, Singing Ways To Feel More Junior (Gael Music) deserves more than a measure of crossover for this unconventional troubadour. Highlights include The House That Jack Built, which addresses misogyny and gender while getting your toe tapping.

Lastly, two torchbearers for rootsy British individualism return. Stick In The Wheel expand on their admired 2015 debut From Here with Follow Them True (From Here). It features their smart, trademark folk-punk synthesis, including vivid London street vignettes White Copper Alley and Blind Beggar of Bethnal Green, sung in broad Cockney by Nicola Kearey, to a title track that dares to introduce folk to Autotune.

You Are Wolf’s self-released KELD again showcases award-winning composer Kerry Andrew, and like Megan Henwood’s River, featured in our last column, it draws on watery inspiration to elegant effect. Andrew has just had her first novel published and is admired by no less than Shirley Collins, which takes us back to where we came in…