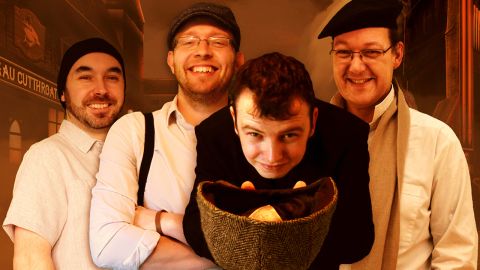 Gandalf’s Fist have come a very long way since their beginnings as an eccentric prog duo from the wilds of Cumbria. This, their sixth album is such a conceptual tour de force, it reduces Rick Wakeman’s King Arthur to the level of a Chas & Dave Cockney knees-up.

A three-CD set, The Clockwork Fable takes place in the mythical undergound city of Cogtopolis and is described as “a steampunk tale of deception and discovery”. The scale of the Fist’s creative power is staggering as they conjure up rich visions of this imaginary world in painstaking, Tolkien-esque detail.

As usual, the band veer endearingly across a wide range of musical styles – crunching NWOBHM-style guitars one minute; wistful Renaissance folk the next – but the glue that holds this audacious project together is passages of narrative voiced by an impressive array of acting talent, including Zach Galligan (Gremlins) and Bill Fellows (Downton Abbey). All this, and some guest warbling by Blaze Bayley as well. What more could you want? (9⁄10)

Also from Texas, Aloft are obsessed by the US-versus-Russia space race of the 1960s. This brilliant instrumental album transports you to the nether regions of the Ionosphere and includes samples taken from a website dedicated to vintage Soviet satellite noises (www.svengrahn.pp. se). If Jean-Michel Jarre was a Cosmonaut, he’d have made a record like this. (8⁄10)

Having got a concept-album trilogy out of their system, these Swedish prog masters can afford to relax. As the title implies, this record is the equivalent of sitting in a deckchair with a knotted hankie on your head, gnawing at a 99. It’s gentle, dreamy and full of light and colour. It’s also the band’s first English-language album, which will surely broaden their fan base. (8⁄10)

From Portland, Maine, Sunrunner are a bizarre bunch indeed. This, their fourth album, mixes jagged experimental prog with bombastic battle-metal vocals. To be honest it’s a less than enticing hybrid, as evinced by the 21-minute title track: a journey of endurance reminiscent of an epic jam between Grand Magus and Queensrÿche in The Fast Show’s Jazz Club. (5⁄10)