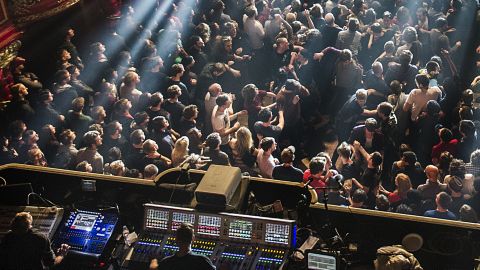 This year marks the 30th anniversary of Meshuggah. Even they must be taken aback by the proliferation of bands engendered by their downtuned, rhythmically complex DNA. Tonight’s three acts share that djent genome.

Micic colours his sound with drum loops, samples and software synths from a laptop, adding atmosphere to his ever-shifting but intensely melodic compositions. Nobody’s Perfect thickens the air with palm-muted grooves and technical yet tasteful soloing on extended range guitar.

687 Days, meanwhile, has the lyrical style of a Joe Satriani ballad. His music could easily fall into the trap of being a throwback to the six-string slingers of the 80s, but Micic’s trance shred is thoroughly modern; futuristic even.

After a brief interval, Rafa Biernacki (vocals/keys) joins his Disperse partners. Reduced to a trio tonight, bass duties are capably handled by the sequencer on the aforementioned laptop. Again, the technological factor enhances the songs – there’s a strong element of EDM to their sound.

Between the heavy riffs and jaw‑dropping displays of speed and sweep picking, Jakub Żytecki triggers samples and delays from a MIDI control pad. Tether and Gabriel sway with a jazzy pop lilt that’s more George Benson than Fredrik Thordendal, but that unmistakable djent heaviness is only ever a few bars away. Message From Atlantis is a stunning widescreen closer from a young Polish band who are mutating the genre from which they sprang.

Plini Roessler-Holgate is greeted with near-reverential fervour when he takes to the stage. Before playing a note, he proclaims, “This is the best show ever!”

The 24-year-old from Sydney has already made a name for himself globally, despite releasing only one album. He has garnered praise from none other than Steve Vai, whose influence is clear in opener Electric Sunrise, as is a debt to fusion maestro Pat Metheny.

Atlas and Cascade are as joyful and playful as they are crushing. Troy Wright’s drums punctuate the heaviness with finesse. Handmade Cities features John Waugh of electropop outfit The 1975 on sax, before a return to the stage of all tonight’s musicians leads into a G3-style wig-out on Away.

Plini’s melange of tech metal, prog and jazz is mature and complex, and yet the vast majority of the sell-out audience is under 25. There’s a new wave of progressive music emerging that they’re surfing.