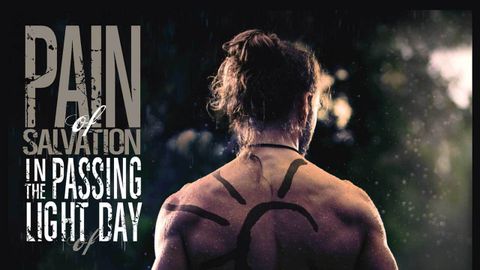 After 2014’s acoustic Falling Home and the progressive rock of Road Salt One and Road Salt Two, Pain Of Salvation bring the metal back to their sound with In The Passing Light Of Day. They’re in the right hands for heaviness, teaming up with producer Daniel Bergstrand who has worked with melodic death metal mainstays In Flames and extreme metal kings Meshuggah.

In The Passing… is another concept album from Pain Of Salvation, in this case about someone facing their own mortality while lying in a hospital bed. The theme was inspired by bandleader Daniel Gildenlöw’s own health troubles (see our feature on page 70 for more information) and the result is an album that combines progressive metal with heartfelt lyrics. Gildenlöw wears his heart on his sleeve, crying in the shower in Tongue Of God. Musically, Pain Of Salvation’s trademarks are all present and correct with the polyrhythms arriving early in the opening track On A Tuesday.

Where the two Road Salt albums had much more of a classic rock sound, thanks to the Deep Purple-style organ playing of Fredrik Hermansson, this time Gildenlöw and Bergstrand go for a much more contemporary vibe. The contrast between abrasive guitar riffs and spectral piano lines in the aforementioned On A Tuesday suggests the industrial gloom of Trent Reznor, reinforced by the whispered vocal delivery in the verses. Meaningless offers more from the NIN school of songwriting with anguish aplenty; the breakdown in the coda of Full Throttle Tribe nods towards Meshuggah’s crushing menace, while the stop-start, staccato of Reasons produces the same jarring syncopation that System Of A Down are so fond of. That’s not to say it’s all unrelenting riff crunching. Silent Gold is built on a melancholy piano melody and Angels Of Broken Things is quietly introspective – at least until the explosive guitar solo. The album is bookended by the two longest tracks – On A Tuesday and the title cut.

The latter begins in a downbeat mood, centred around a mournful, twanging guitar not unlike Julee Cruise’s Falling. ‘Some candles last an hour, and others one full day, but I want to be like a sun,’ laments Gildenlöw. Eventually, of course, the full band join in to crank up the intensity as the tracks head for the inevitable crescendo. That’s the album in a nutshell really. The dynamic peaks and valleys are easy to see coming, but Gildenlöw loads as much drama and passion into every track as he can. If making the record was a cathartic experience for the singer, it’s no less powerful for the listener.