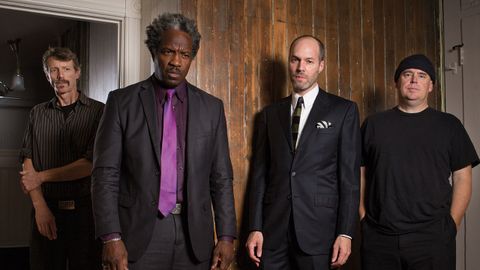 It takes a robust sense of self to approach any Oxbow record, such are the destabilising existential incisions that frontman Eugene S Robinson frequently makes with that scalpel-sharp tongue of his. Part of the skewed joy of following the San Francisco quartet’s slow evolution over the last 28 years has been in the challenge presented by the untamed complexity of what they do. An art rock band in word and deed, they have channelled vicious honesty and musical fearlessness into records that sound wholly without sonic precedent and yet devastatingly emotional and dense with interpretive possibilities. But even by their own eccentric standards, Thin Black Duke is extraordinary; by far the most accessible album of the band’s career, it’s also their most tricky to pin down and one of the most wilfully unsettling records in recent memory.

Opener Cold And Well-Lit Place sets the scene for Robinson’s latest trawl through reality’s blackest shadows, veering from spidery, lopsided lo-fi rock to unnerving Beatles-esque crescendo stabs, his harangued diatribe taking him from horrified whisper to incensed howl. A woozy slab of bloated bar-room blues that slithers and grinds through oases of lush strings, Ecce Homo is almost recognisable as regular rock music, and yet Oxbow’s innate otherness is ever- present and wickedly disorientating. You might even posit that they’re exhibiting pop sensibilities here, but not in any sense that Ed Sheeran would recognise. A Gentleman’s Gentlemen ups the tempo and distortion, with Robinson ranting like a drunken uncle, bellowing ‘The Duke is deluxe and delightful!’ while sounding ready to rip someone’s head off. It’s exciting and terrifying in equal measure, and it’s that mixture of cathartic uplift and mortal disquiet that seems to propel the album toward its bewildering conclusion, past the soporific clangour of Letter Of Note and The Upper’s languorous voodoo blues to The Finished Line, a song so queasy and harrowing that you suspect even Eugene was momentarily lost for words by the end. Casual listeners should think twice before total immersion, but the potential rewards for letting these bastards into your head are immense.

Oxbow: "We’ve always aimed to link into the human soul, spirit and psyche"