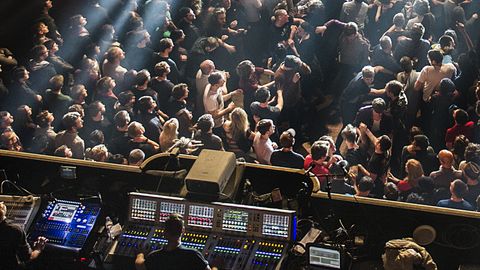 Just three weeks on from an appearance at Night Of The Prog in Loreley, Maschine are taking part in all-day prog metal event Prog.Metal.Madness! in New Cross. It’s an intimate setting for the band, and being up close and personal with Maschine performing in a pub is a mouthwatering prospect.

Resistance, from 2016’s Naturalis, effervesces and broods in equal measure. Burbling synths and a groove that could have come from Tool’s rhythm section gradually lead into the shared male and female lead vocals that are a signature of this band.

As pop melodies share space with metal riffs, bassist Dan Mashal alternates between deft funk-styled fingerwork and Chris Squire-influenced tremolo picking. During Night And Day he’s pogoing so high he’s in danger of braining himself against the ceiling.

Frontman Luke Machin’s debt to his hero Francis Dunnery is evident. The songcraft in fusing heavy sections with accessible and memorable hooks is just one aspect of that influence. The timbral quality of his voice is another, as is the jaw-dropping facility he displays in firing off short, sharp bursts of lead guitar. This is anything but The Luke Machin Show, though – there’s no descent into self-indulgence at the expense of the song, or grandstanding to the detriment of the tight ensemble playing.

Usual drummer James Stewart is on duty with his other band, Poland’s death metal titans Vader. His replacement has been drafted in at a week’s notice to learn all the songs, but Mariusz Marecki, the man in question, handles the machine-like rhythms of Megacyma in an undaunted manner.

The looser stop-start feel of Rubidium is a fun way to end, and all five on stage are having just as much of a blast as the small but vocally appreciative crowd. The set has been part of an all-day ‘celebration of fringe metal styles’ hosted by radio show Prog.Metal. Madness. On the prog side of the divide, Awooga’s heavy take on space rock impresses, as does the funk-metalmeets-fusion of The Parallax Method. What is perhaps most noteworthy is the variety of styles coexisting under the prog metal banner, which is definitely something worth celebrating.