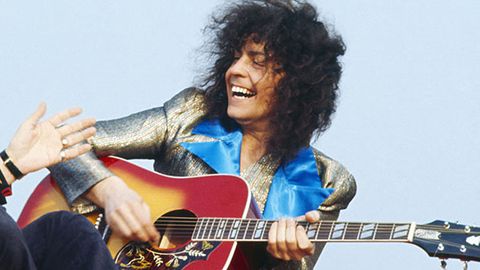 Nostalgic discussion of T.Rextasy tends to overlook the B-sides to Telegram Sam; understandably, given the majesty of the A-side. Yet Cadilac (as it was spelled on the label) and Baby Strange were the very essence of Bolanism, and play starring roles in the T.Rex movie. They blaze through this like neglected children eager to outshine their adored siblings, Jeepster and Hot Love.

Ringo Starr’s 1972 film is near legendary – but not legendary. With all the will in the world it’s no Purple Rain or A Hard Day’s Night. It’s a treat for believers, but if it converts sceptics it’ll do so through the raw live footage rather than its “quirky” set-pieces. Bolan, energised and elemental, puts enough into these Wembley Empire Pool shows to make that a possibility.

Ringo had quickly become something of a fan and friend, happy to cheerlead for “the new Beatles” – which T.Rex never were, in intent or content. Marc’s bravado was infectious, and briefly and brilliantly they were the only game in Glam Rock town. It’s only in later decades that they’ve been appreciated as a genuinely astonishing band, flush with flair, funk and fire. Perhaps this flawed but lovable document has played a part in that more enduring acceptance.

As well as the matinee and evening shows – introduced by Emperor Rosko, climaxing in ferocious 12-minute jams of Get It On which showcase how astute Finn, Currie and Legend were at sussing when Marc and his Les Paul were going to go off on one – Starr sets up studio jams, with Elton John joining Children Of The Revolution (the best thing Reg ever did). There’s a “mad hatter’s tea party” (filmed on John Lennon’s estate) where Marc medleys through acoustic versions of the hits with a miming string section. (Catweazle actor Geoffrey Bayldon soldiers on despite an evident lack of clear direction). Even here, Bolan is as mischievously confident and naturally fluid as ever.

This reissue lovingly cleans up and curates the cosmic dancing. The live music, mixed to 5.1 by Tony Visconti, is spread over two CDs while two DVDs offer the 67-minute film, the gigs, and a raft of bonuses. Marc and Ringo lark around backstage, Visconti and son Rolan Bolan chat, and there are documentaries about the T.Rex phenomenon. It’s all housed in book form with new notes and previously unpublished photos. The two-penny prince remains priceless and peerless.