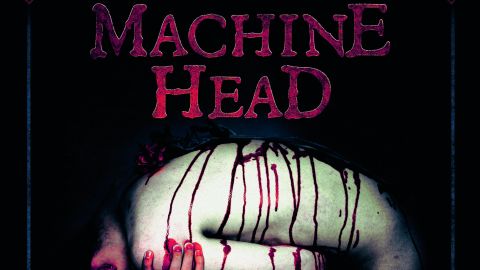 ‘Ohhhhhhhhhhhhhhh, fuck the world!’ begins Machine Head’s ninth album. Opening song Volatile, written and recorded on the day of the clashes in Charlottesville, is an indication of what’s to come. This is a record about a society in flux and a band in flux – an unfiltered, 76-minute journey through Robb Flynn’s worldview, often soaked in testosterone and devil-may-care attitude.

The first part of Catharsis is an unrelenting rush of energy. The title track is a classic Machine Head anthem, its promised emotional purge packed into the pit-flattening snarl, ‘Can you feel my catharsis?!’, while Beyond The Pale has already attracted attention for its battering riff, which shares DNA with Strapping Young Lad’s Love?. California Bleeding speeds along like a sports car on a hot day, and Triple Beam is a satisfyingly aggressive retelling of a street confrontation, all stifled whispers and King 810-style spoken-word poetry. Even the strings-tinged Kaleidoscope, a song celebrating the power of music (‘Songs fill what religion won’t’), has a rough edge that was missing from previous songs on the subject, such as Darkness Within. There’s a sense of letting loose, of revisiting the unrestrained thrust and unashamed groove of The Burning Red and Supercharger.

So when Bastards arrives, it comes out of nowhere. Beginning as a letter to his young sons about the troubled state of the world, it descends into a Pogues-alike drunken Irish folk song about acceptance and love, including the line: ’Give us all your faggots and your niggers and your spics…’. It’s slightly cringy; a misfired attempt to show that Robb is woke and trying to reappropriate slurs, though his heart’s obviously in the right place. It’s a pure distillation of the personal politics that colour the record, showing Robb’s no longer the reprobate who screamed about a shotgun blast on Davidian, but feels a similar compulsion to speak his mind.

The positive Hope Begets Hope and Screaming At The Sun are a return to riffing business as usual, but the momentum’s been lost. It’s broken again by Behind A Mask, an acoustic song that has a touch of Opeth about it, showing they’re keen to stretch themselves even at this stage in the game. Bassist Jared MacEachern’s co-vocals are impressive, as is his subtle presence on the rest of the record. It’s a natural end to Catharsis – but there’s still a third more to come, and as good as the songs are, they feel like an afterthought. Heavy Lies The Crown, about France’s ‘Spider King’ Louis XI, is all sinister machinations and plucked strings, while Razorblade Smile is a ridiculous tribute to Lemmy (‘I’m eating pussy by a dumpster/Beard stinking like snatch’).

If 2011’s Unto The Locust was a grand work of structured songwriting and 2014’s Bloodstone & Diamonds was a safe continuation, Catharsis is Machine Head with the brakes off, freewheeling through past and present as they see fit. It’s blood, guts, sweat and spit all nailed plainly to the mast, and all fucks thrown to the wind. Robb’s said he’s got no plan for Machine Head’s future, and perhaps that’s why the record lacks some coherence, but their rebellious spirit nevertheless remains strong.