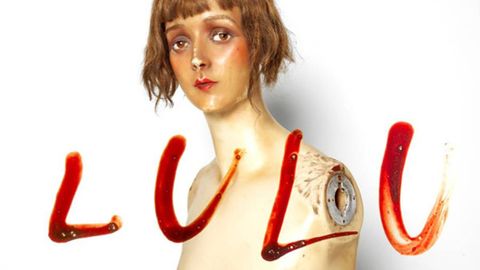 The arguments about this ferociously self-regarding project began the moment news of it escaped like bad gas from the manholes of New York City. The arguments will only grow more heated now everyone can at last hear it.

Great rock art is always transgressive, of course. How many Lou Reed and Metallica fans will see this as simple rule-breaking, though, and how many just plain wrong, is going to hover over the actual music like a cloud of flies.

The basic outline is as follows: Reed has penned lyrics inspired by a late 19th-century and an early 20th-century play by the German expressionist Frank Wedekind: Earth Spirit and Pandora’s Box. Published in 1895 and 1904 respectively and set in Germany, Paris and London in the 1890s, the stories revolve around Lulu, a magnet for the suffocating desires, backhand love and unfettered abuse of all the men who fall upon her. Until, finally, left with “no real feelings in my soul”, she meets Jack the Ripper, whose “love” proves greatest and most fatal of all.

Metallica have attempted to provide the accompanying river-deep musical meditations, subsuming their own musical identity in order to come up with what guitarist Kirk Hammett has called “a new animal”. Something like a large black dog, perhaps, that whimpers and snarls and bites and shits in places you really wish it hadn’t. Then does it again to spite you.

But is it, like, any good, you ask? Does it, in a word, rock? The answer there would be, well, yes and no. Traditionalist metal fans will be disappointed. For it is clear from the moment opening track Brandenburg Gate wafts in like a fog – Lou cutting straight to the chase: ‘I would cut my legs and tits off/When I think of Boris Karloff and Kinski’ – that this is not an album made for the ‘average’ rock fan. Or as Reed snarls in The View: ‘I want to have you doubting/Every meaning you’ve amassed’. The cumulative weight of this album will certainly do that for you.

Some may find the trance-like mood of much of the music morbidly disorientating, even repulsive. And it will be no good saying this is intentional. The nausea of tracks like Little Dog (‘A puny body and a tiny dick/Little dog can make you sick’) is so tangible many will question why they are even listening to this. For others though – not just Reed diehards used to his self-loathing, his bitter noir-mots, his almost juvenile desire to say the unsay-able – the underlying beauty of what these artists from, on paper, such disparate ends of the rock spectrum are trying to convey will be breathtaking.

It’s not about individual tracks, though there are immediately several stand-outs like the chilling Pumping Blood, whose demented violins reminds one of Street Hassle-era Reed before building over several pendulum-like minutes to a full-on Metallica-sized aural assault. It’s about the overall piece. A conceptual work that has to be absorbed as a whole to even begin to traverse its sonic foothills, at 90 minutes-plus this is not exactly an iPod-friendly trip. Unless, maybe, you happen to be horizontal by the time you get to final track Junior Dad, the final 12 of its skin-peeling 19 minutes overwhelmed by waves of drone that recall John Cale’s viola, Nico’s harmonium, and Cliff Burton’s beautiful bass-washes and neo-orchestral harmonic effects on instrumentals like Orion.

Reed has built a career based on the hope that, as he says, “the intelligence that once inhabited novels and films would ingest rock”. But while his best work, with and without the Velvet Underground, has always benefited from that creative impulse, he has skated so close to self-parody so many times, his energy has often become dissipated, spread as thin and hollow as the mocking sneer that appears to hover over his work.

This is where Metallica come in. A genuinely clubbable for-real rock band – as opposed to the expensively hired hands Reed has spent the past 40 years working with – what they bring to the party is pure blissfully un-ironic fire; a fist of fury to replace the limp wrist.

It makes for an absolutely shattering combination. You have been warned.