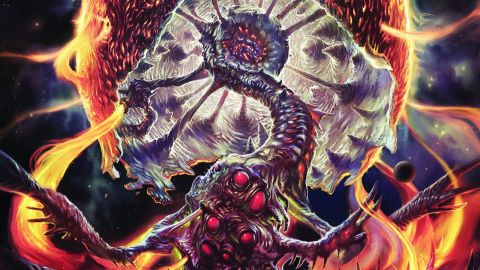 One of the most promising bands to emerge from the UK metal scene in recent years, Karybdis have yet to receive the attention they deserve.

The frustrating thing is that Samsara sounds very much like the kind of modern metal album that would give the genre a valuable kick up the arse. The whole thing sounds huge, of course, as most things touched by the hand of studio guru Mark Lewis tend to, but it’s the Londoners’ songwriting that makes this such a gripping 40 minutes. The subtly eclectic blend of melodic death metal, 21st-century metalcore and prog-tinged technicality that Karybdis have propagated from the start now sounds incredibly timely and fresh.

Songs like Forsaken and Summon The Tides offer unstoppable hooks and post-Killswitch riffing galore, but there are also deft symphonic touches, razor-sharp syncopated chug-downs and some moments of genuine pathos and melancholy to boot.

There are big choruses, too, but mercifully not ruined by whiny vocals or a lack of brutality. Underdogs they may be, but Karybdis have absolutely nailed this whole metal thing.