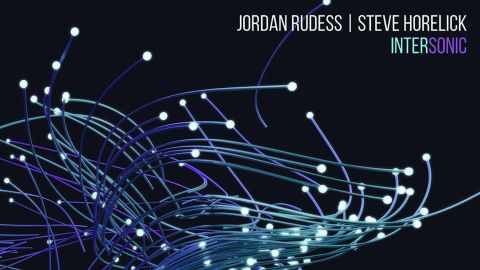 It sometimes feels that Jordan Rudess has a volcano of inspiration brewing up inside him that day-job band Dream Theater never truly tap into. The prog metallers’ sound is well defined, with the keyboard player’s vital role a cog in a vast, well-oiled album-tour machine. It’s in his extramarital musical affairs that it seems the keys maestro can truly indulge himself, from his many solo albums and the wacky Levin Rudess Minnemann project to his Wizdom software company, which has devised a number of apps to allow people to make music on their mobiles and tablets.

Rudess’ latest project hidden up his velvety wizard sleeve is a collaborative record with composer and electronic musician Steve Horelick, and the result is an absorbing collection of instrumental musings and ruminations. It’s not exactly the finger-mashing displays of virtuosity or high-jinks frolics you’re used to in Dream Theater’s blitzkrieg instrumental salvos. Instead, its a more restrained exploration of the stratosphere of sound. Opener Child Mind dips its toes into more ambient hues and reveals the nucleus of this project, as floating, glistening piano marries with electronic soundscapes. While Horelick has written scores for a number of TV shows and films – landing him an Emmy nomination in the process – electronic music is said to be his true passion, with his home no doubt brimming with a smorgasbord of gadgets.

Intersonic is largely about the feeling, with the album’s creation more like a blank canvas that’s gradually filled with call-and-response, reactionary creativity – Rudess often providing the flourishes and Horelick laying down the foundation. Northern Lights, for example, is a glittering cascade, while the standout Beyond Time is an at times aching lament that pulls at the ol’ heartstrings by introducing some welcome dark turns and brief, mournful meanderings.

There’s still room, of course, for some finger gymnastics – it wouldn’t quite be Rudess without it – with Quantum Fuzz giving the piano a real workout, while Swarm is a tornado of haunting movie soundtrack majesty tossed in a blender with electronic bleeps and blurts before diverting into near noise. It’s otherworldly tracks like these that you would imagine will never be seen in Dream Theater’s catalogue, and show why Rudess’ latest dalliance outside of Petrucci and co deserves a bash. Intersonic doesn’t always reach the dizzy heights, nor is it likely to be many people’s album of the year, but this chance to witness two men’s minds melting together so effortlessly in aural harmony is a rare treat.