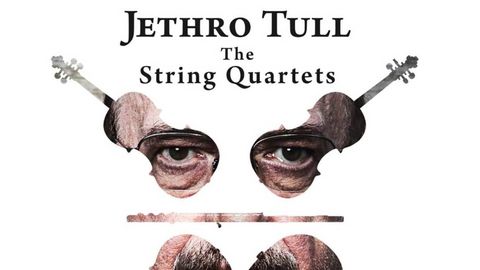 Since rapidly evolving from blues beginnings, Jethro Tull have often sported classical twists and flavours in their music, whether through Ian Anderson’s jazz-driven flute interludes, Martin Barre’s ornate guitar flights or baroque arrangements that cushioned their ensemble riffs. Tull first used a string section on 1972’s Thick As A Brick, then a string quartet on 1975’s Minstrel In The Gallery, so it seemed perfectly natural in 2004 when Anderson gave his music a classical rinse on Ian Anderson Plays The Orchestral Jethro Tull,a successful live album featuring the band with the Neue Philharmonic Frankfurt in Mannheim, Germany, arranged by keyboardist John O’Hara.

Now, favouring solo work with O’Hara over further Tull line-ups, Anderson has ventured back into similar waters by giving a further set of Tull classics to renowned string quartet the Carducci Quartet. The idea came after Anderson and O’Hara were struck by the supernatural telepathy flowing between violinists Mathew Denton and Michelle Fleming, cellist Emma Denton and viola player Eoin Schmidt-Martin at a concert at the London Symphony Orchestra’s LSO St Luke’s. Working with O’Hara’s arrangements of Tull songs stretching back to 1969’s Living In The Past, the Anglo-Irish quartet pluck, glide and burrow deep into basic melodies that sound like they had been composed for the kind of chamber setting first introduced by Haydn in the 1750s.

Songs selected (and awarded new titles) include Locomotive Breath (Loco), Only The Giving (Wond’ring Aloud) and Aqualung (Aquafugue) from the album of the same name, Bungle In The Jungle from War Child and a beautiful conjoining of title tracks from late 70s folk rock albums Songs From The Wood and Heavy Horses. Crest Of A Knave’s Farm On The Freeway (retitled Farm, The Fourway) gains a haunting new majesty as the strings soar, furrow and dogfight with Anderson’s flute, sounding ancient and arcane as a wind-battered stone circle.

Curiously, while Anderson’s flute forms a rich alliance with the quartet’s breathtaking interplay, his vocal additions sometimes sound like a pissed-up street singer who stumbled into the wrong room. The inclusion of 1971’s A Christmas Song and 1977’s Ring Out, Solstice Bells are somewhat incongruous, even mood destabilising. The former is even retitled Pass The Bottle and ends with Anderson croaking, “Hey Santa, pass us that bottle,” breaking the spell of an otherwise magical set and wrenching it into a late Christmas booze kneesup dominated by his determinedly wacky old spotlight-mugging character.

But, on the whole, this is a worthy endeavour and now the oldest-sounding milestone in the mighty Tull songbook.