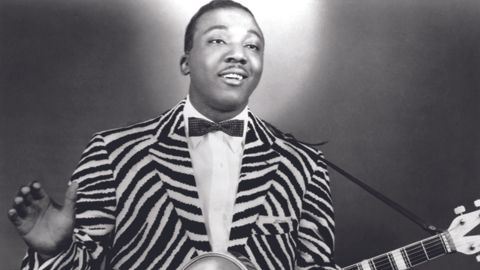 The name JB Lenoir is not often dropped in blues discussions these days, perhaps because he died – still only in his 30s – in 1967, and so just missed the opportunities that fell to near-contemporaries of Chicago blues like Buddy Guy and Otis Rush.

But calling him a Chicago bluesman risks giving the wrong impression of him. Yes, he made many records there, with fellow craftsmen such as Sunnyland Slim, Little Brother Montgomery (and his lesser-known pianist brother Joe) and tenor saxophonist JT Brown. This exhaustive 58-track double CD diligently assembles both his issued recordings on Chess/Checker, JOB, Parrot, Shad and Vee-Jay and a similar number of unissued ones.

But, given what else was going on in Chicago in the 50s, Lenoir cuts a rather odd figure. His music has none of the pile-driver ensemble sound of Muddy Waters or Howlin’ Wolf. An idiosyncratic guitarist, angular and even sometimes awkward, he typically worked without a rhythm guitarist and sometimes without a bassist, and the resulting guitar-piano-drums line-up sounds a little thin. Admirers might argue that this was all to the good, since there was little to muffle Lenoir’s piercingly high voice, a sound unlike anything in Chicago at the time.

What the bareness of the studio acoustic also helps to expose is that Lenoir’s material was somewhat variable. Korea Blues, Eisenhower Blues and Tax Paying Blues, though not very politically sharp-edged, were challenging songs to issue back in the 50s. So would Everybody Wants To Know (Laid Off Blues) have been, if Chess had ever released it. Performances such as We’ve Both Got To Realise (We Can’t Go On This Way), which has a quietly reasonable tone reminiscent of Lonnie Johnson, or Sitting Down Thinkin’, a meditation on mortality, have a gravity too rarely found in blues compositions. They are balanced throughout his work by cheerful up-tempo numbers like Mama, Talk To Your Daughter.

But a lot of Lenoir’s recordings in this period are unmemorable. Looking at titles such as I Lost My Baby, Oh Baby or She Don’t Know, you wonder if their dullness indicates a failure of inspiration or something larger – an impatience with the standard subjects of blues songs.

Lenoir’s greatest work was still five or six years in the future, when he would record a couple of solo albums, Alabama Blues! and Vietnam Blues, that gazed steadfastly at the tensions of black life in the era of civil rights. Compared with those recordings, some of his work in the 50s seems trivial – no more than a necessary apprenticeship. That said, there’s a great deal to admire and enjoy in this set: not only Lenoir’s always impeccable singing, but also valiant piano work by Sunnyland Slim and the Montgomery brothers, a couple of electrifying vocals by Johnny Shines cut during a Lenoir session, and a pair of graceful solo numbers recorded by Paul Oliver (first issued on the LP Conversation With The Blues) that anticipate, particularly in I Been Down So Long, the intensity of his later work.