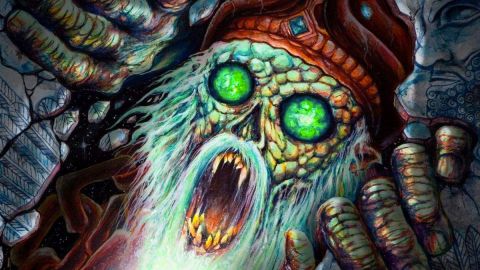 1. Spewn From The Earth
2. Steps Of The Ziggurat/House Of Enlil
3. Electric Messiah
4. Sanctioned Annihilation
5. The Pallid Mask
6. God Of The Godless
7. Freebooter
8. The Witch And The Christ
9. Drowning Dog

With the recent return of pothead godheads Sleep (barely six months separate their unexpected comeback LP The Sciences from Electric Messiah’s release), it seems that Matt Pike has been able to siphon off any and all of his slower, trippier, stoner groove instincts into his old teenage doom trio. This has left High On Fire free to ratchet up the frantic speed and bludgeoning chaos on their eighth album. Even though the previous two albums – 2012’s De Vermis Mysteriis and 2015’s Luminiferous – were also produced by Converge’s Kurt Ballou as they scampered along with a caustic bloodthirst, Electric Messiah reaches levels of intensity hitherto unmatched in this extremely heavy metal trio’s 20-year career.

Spewn From The Earth bursts out of the speakers like Discharge and Darkthrone starting a pub fight, the title track is a hammer-down bull-charge inspired by Matt’s dreams of Lemmy (“He gave me a bunch of shit, basically, and was hazing me,” the frontman entertainingly relates in the press release), while Freebooter – inspired by another English hero, Sir Francis Drake – is pure fire-spitting thrash metal through a sludge prism, with its relentless battery and devilish swashbuckling solos.

Sumerian-themed ‘rock opera’ Steps Of The Ziggurat/House Of Enlil has a lumbering mid-tempo, but Des Kensel’s hyperactive drumming has that bone-crushing, primeval cannibal ritual quality, ensuring that the nine-minute epic maintains a high nervous energy throughout. This is equally true of other songs where the chords are well spaced, like The Pallid Mask and The Witch And The Christ, that never get a chance to stretch and plod thanks to Des’s ants-in-his-pants impulse for kit demolition. Of course, it could be argued that it’s all a bit one-note, but as that one note is the note that makes people shit themselves, it doesn’t really stand up as a valid criticism.

For Fans Of: Motörhead, Kylesa, Entombed