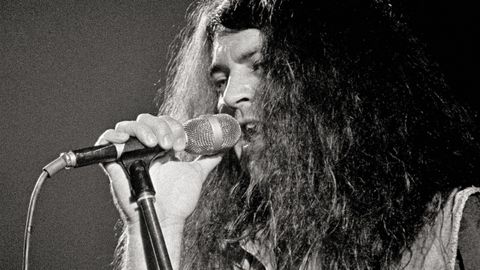 Led by the man who had sung Strange Kind Of Woman during Deep Purple’s glory days, Gillan was a strange kind of band. Fronted by one of the most famous rock stars in the world, their rough-and-ready albums sounded as if they’d been knocked out quick before the local boozer shut its doors. And they were a funny looking bunch: portly bassist John McCoy could have passed for a wrestler; guitarist Bernie Tormé wore a pirate’s eye-patch.

Formed in 1978, the band’s identity was informed by its leader’s blokeish persona. In marked contrast to his former Purple bandmate and nemesis Ritchie Blackmore, who ruled Rainbow with a rod of iron and a high-minded artistic sensibility, Ian Gillan created a rock band as unpretentious as Status Quo, with a drinking-club camaraderie that soaked into the music.

Collected in this new box set are five albums released between 1979 and 1982, plus the aptly titled For Gillan Fans Only, a set of off-cuts first issued with 1980 album Glory Road. Not included is the 1978 debut Gillan. Also absent is the additional bonus material featured on the 2007 reissues of the Gillan catalogue. As box sets go, this is lightweight: no previously unreleased material, or even any fancy packaging.

What it does contain – across those five albums, all of them Top 20 UK hits – is the most powerful music the singer ever recorded without Purple. In the mid-70s he’d gone off-piste, doing jazz-rock fusion with his Ian Gillan Band, but with the Gillan album Mr. Universe in 1979 he returned to full-on heavy rock, and so it continued through to the band’s 1982 swan song Magic, on which Tormé was replaced by future Iron Maiden guitarist Janick Gers.

As a body of work, it is erratic. In places brilliant, in others prosaic. Gillan’s hits were frivolous: OTT versions of rock’n’roll standards Trouble and New Orleans, and the tongue-in-cheek original No Laughing In Heaven. But there was a serious side to the band, evident in the anti-nuke protest Mutually Assured Destruction and the existentialist epic Born To Kill.

Ian Gillan would go on to join Black Sabbath, of course – a famously comical mismatch – before the inevitable reunion with Purple. But as he fondly recalled: “I loved the Gillan band with its presence that oozed rock’n’roll.” It was fun while it lasted./o:p