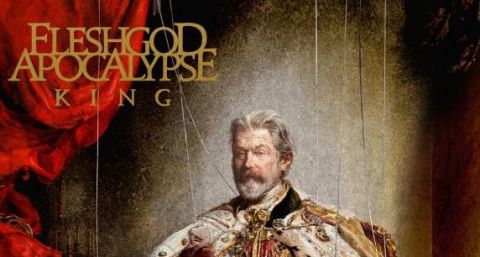 It’s tempting to praise Fleshgod Apocalypse for trying to not get tied down by sonic gimmicks, and for attempting new things on King.

It’s also easy to throw proverbial rocks at them for watering down their identity and losing what made them good. The Italians have spent their last two albums making the most brutal, ludicrously over-the-top, symphonic technical death metal imaginable, all sweeping strings, histrionics, and triggered drums that sound like small thermonuclear detonations. On this fourth album, the symphonics are toned right down in the mix, the drums sound like drums not bombs, and the tone is more drama than melodrama.

There are advantages to this approach: songs stand out from each other, the gruff-but-clean choruses feel more natural (particularly on And The Vulture Beholds) and the non-metallic operatic aria of Paramour comes as a surprise, heightening its impact. The downside is that the tech-death now has to carry much more of its own weight (with the production neutering the brutality), and it fails to step up to the mark. King is not much fucking fun as a result.

From a band capable of brilliant songs like The Violation and Elegy, its mediocrity is hugely disappointing.