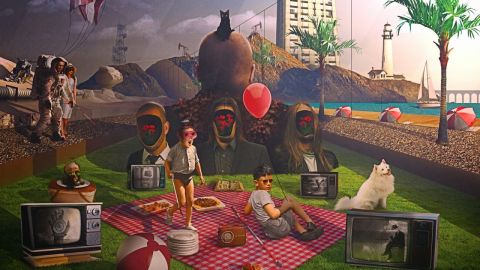 It’s not often you’ll see Primus and King Diamond mentioned in the same sentence, but that’s about to change.

Escapethecult are a supergroup formed by Kamlath bassist Peter G Shallmin, roping in drummer extraordinaire Tim Alexander (Primus/A Perfect Circle), heavyweight gunslinger Mike Wead (King Diamond/Mercyful Fate) and Uneven Structure’s Matthieu Romarin on vocals. That’s an impressive list, right? Unfortunately, the debut offering from the quartet doesn’t quite live up to expectation. That is to say, it’s a lumbering, inarticulate mess. The spiralling guitars and melodic meanderings of tracks like Backfired and Clandestine definitely seem to be heading somewhere – it’s just that they never arrive. Wead’s layered, near-orchestral harmonies at the end of This Time Will Come are the closest any of these ideas come to a conclusion. For an album clocking barely over half an hour, it’s telling that the listening experience is one that feels much, much longer.