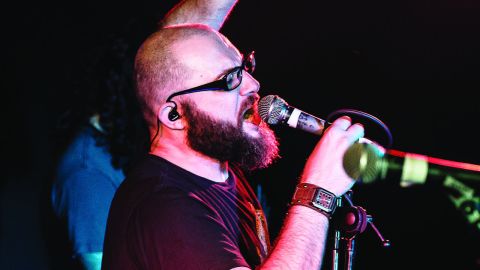 Close your eyes and openers DORJE [6] sound like a decent band: slightly dated, but with shades of Mudvayne’s proggier nu metal and dollops of Tool worship. Unfortunately they have so little in the way of onstage chemistry that they struggle to hold the crowd’s attention, who look like they’ve just woken after being cryogenically frozen in 2001.

The hair may be greyer and t-shirts faded, but it’s a 90s metal crowd. Which is a shame, because EARTHTONE9 [8] were streets ahead of so many more lauded outfits of that time you’d hope that people would have cottoned on by now.

The Nottingham post-metallers remain unflashy, yet unusual. The dark, creeping, lurching experimentation of Neurosis melded with the groove-heavy riffs of Helmet and vocalist Karl Middleton’s still sumptuously soaring vocals and wildly expressive presence still sound stylistically radical in 2016. It’s not totally about nostalgia either, with new songs from 2013’s IV greeted enthusiastically, but any time the band dip into their superb arc’tan’gent album they’re are greeted with the biggest cheers. Star Damage For Beginners and the band’s calling card, Tat Twam Asi, still sound particularly massive, and you feel privileged to be one of the few that know who this band are. The cult of earthtone9 is older, but still very much alive.