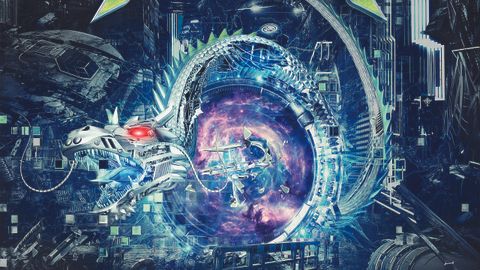 By their seventh album, you’d be forgiven for expecting Dragonforce to settle into a middle-aged rut, enthusiastically chasing their own tail for a diminishing audience of insatiable fanatics strumming plastic swords like air guitars. If there were any hints of that fate on 2014’s aptly titled Maximum Overload, on this follow-up Dragonforce have found a new lease of life, and fresh boosts of passion and exuberance, thanks mostly to their own strenuous efforts to remain a distinctive and audacious world-class metal phenomenon.

The melodies are more assertive, the arrangements breathlessly wired and shot through with multiple distractions, but they have a stronger, more organic flow as unlikely disparate elements bang together to produce sparks. So after Judgement Day’s euphoric trance intro there’s a blastbeaten passage of imperial black metal that soon gives way to a verse that’s part Green Day pop-punk, part REO Speedwagon at 300mph, while WAR! is effectively a duel between melodic/anthemic/symphonic elements and vituperative breakneck Brit-thrash. Opener Ashes Of The Dawn is the closest this album gets to Euro-muso bog-standard, but the rest manages to keep the listener dazzled, engaged, amused and aroused, the foundational twin guitars of Sam Totman and Herman Li still finding new levels of fluid, frantic jubilation.