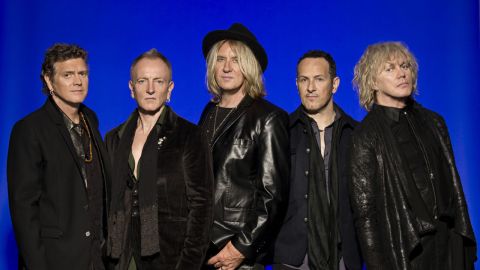 Joe Elliott seems to have spent most of the past 30 years grumbling about how Def Leppard aren’t given the respect they’re due. He has a point – you don’t become the 27th biggest-selling British band of all time without doing something right. But credibility in the eyes of the cultural gatekeepers still evades them.

In truth, he should get over it. For one thing, there are a lot worse places to be than sitting atop the proceeds of 100 million record sales. And for another, his band have just made their finest record since the glory days of the 1980s.

Leppard’s 11th studio album is being touted as a return to basics. Well, it is and it isn’t. There has never really been a Def Leppard factory setting. The Sheffield band have cycled through various incarnations during their career – heavy metal kids, groundbreaking arena rockers, grunge wannabes, glam-rock revivalists and, on 2002’s rotten X, an ageing boy band. But if ‘basics’ means gloriously catchy tuneage, then they’ve nailed it.

Def Leppard is wall-to-wall songs of the kind that no one – not even Def Leppard – makes any more. Dangerous is a prime slice of Hysteria-era arena rock that crackles like a drunk tramp pissing on the third rail, Sea Of Love mugs a passing gospel choir and forces them to wail over the top of a crunching, low-slung riff, while All Time High is quite possibly the most euphoric song you’ll hear all year. ‘Never giving up, never going to die!’ hollers Elliott on the latter.

The singer is the first to admit that Leppard aren’t Bob Dylan. Sometimes they’re barely even Bob The Builder. But then that’s the beauty of it – if ever a band were cliché-proof, it’s Def Leppard.

If nothing else, you have to admire their sheer brass balls. With its crackling guitar and nuclear-detonation bottom-end, Let’s Go doesn’t so much revisit Pour Some Sugar On Me as move into its spare room, steal its cornflakes and start sleeping with its wife. But even that pales into insignificance next to the finger-poppin’ white-boy funk of Are You Man Enough?, which rips off Queen’s Another One Bites The Dust so shamelessly it should come with its own stick-on handlebar moustache.

There are missteps. We Belong is a soppy ballad, and the ill-advised electronic glitchery on Energized sounds like a band who just have just discovered trip-hop.

But for the most part, Def Leppard is the sound of a band who have rediscovered their sense of purposes after a wobbly 25 years. Hip? Nope. Cheesy? Occasionally. Fun, memorable, life-affirming? Yes, yes and yes. And that counts as a win, credibility be damned.