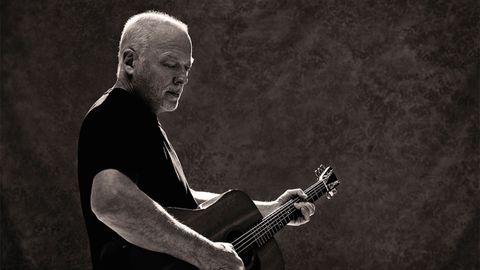 They’ll call it the Floydian Slip. With Pink Floyd’s final album The Endless River – cobbled together from ambient instrumental offcuts from 1994’s The Division Bell – coming under fire in some quarters last year for its lack of lyrics and melody, Gilmour’s fourth solo album sounds like melodic sleight of hand.

Yes, there are spacious atmospherics and Gilmour’s trademark spacewalk guitar licks all over the shop, wafting around like ice-smooth meteorites floating between galaxies. But, crucially, there are also solid, tangible tunes that Gilmour must have been stockpiling secretly under the mixing desk of his houseboat studio the Astoria throughout The Endless River sessions, like a kind of guitar god Gollum.

Inevitably, being a rock legend of a certain age, a fair chunk of said tunes lean towards the trad, but while most millionaire musicians tend to settle comfortably into blues or folk once the ideas bank has collapsed, Gilmour at least spreads his retro nets wide. Awash with sultry sax and seamy drum brushes, The Girl In The Yellow Dress casts him as a 50s jazz club chanteuse, while Dancing Right In Front Of Me takes the same Nina Simone vibe and adds dashes of Baltic polka.

Faces Of Stone indulges in misty Celtic folk with touches of haunted gypsy carnival accordion as Gilmour seems to recount a romantic weekend break in Bavaria, and the title track is the sort of very white gospel pop that’s been the backbone of prog rockers’ solo albums since about 1982. After 50 years of exploring celestial rock spheres with Pink Floyd, at least Gilmour is mingling his palette with more terrestrial styles.

For the Floydsters, parts of Rattle That Lock virtually sound like a Jive Bunny megamix of 70s Floyd moments. Beauty beautifully knits those glacial space wails that have made Shine On You Crazy Diamond an aerobatic display team favourite since 1975 with the paranoid reverb funk riffs of Another Brick In The Wall Part 1, and indeed echoes of The Wall reverberate throughout.

Today boasts a steamy funk strut it’s learnt from Young Lust, and In Any Tongue presses the same ‘Swelling Epic’ buttons as Comfortably Numb. A Boat Is Waiting even includes spoken-word samples à la The Dark Side Of The Moon.

And over it all, naturally, Gilmour’s glorious guitar lines tower like stately sonic architecture, his tremulous home counties lines of evocative pastoral imagery taking second billing to the real star of the show. A gentle watercolour portrait of the artist as a young man.