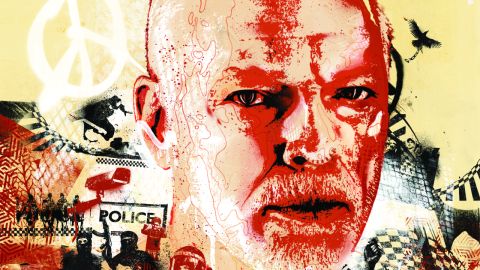 Four solo studio albums in 37 years suggests that it’s more than mere self-effacement that makes David Gilmour describe himself as occasionally inert. But the half-full interpretation of that statistic is that his personal quality control is set extremely high, as we know to be true.

So, six months shy of 10 years since the highly agreeable On An Island, the softly spoken figurehead steps out of the studio with fresh produce. Imminent European stage work and North American live plans next year further emphasise that he is engaged for battle, and ready to stand behind his new wares. Sub-editors worldwide can dust off the hoary “shine on” headlines one more time, at least.

Our introduction to Gilmour’s latest adventure is the one that was born at Aix-en-Provence railway station, where he heard the little SNCF train company jingle that gave birth to the album’s sprightly title track. Lyrics, as largely throughout, are by Mrs G, Polly Samson, and if you had an ’er indoors who could quote from Milton, you probably wouldn’t go elsewhere, either. Production, meanwhile, is courtesy of the assured cooperative of Gilmour and another trusted ally and empathetic spirit, Phil Manzanera.

Untrammelled by expectation, it moves at its own pace.

Decades of globe-straddling eminence, as a guitarist and instigator of transcendental moments of inspiration, will tend to heap unreasonable demands on any latter-day project. But if the famed jewels of Gilmour’s chronicles may, over time, see off these newly-minted creations, and if no central motif navigates the way, Rattle That Lock comes to reward repeated visits, with a sagacious heft that only seven decades of living will bring.

The record bleeds softly onto the horizon at first light with the almost classical intonation of 5am, onto which canvas the guitarist dabs his unmistakable oils for an atmospheric instrumental preprandial.

Then it’s down the station for that title piece, on which one can picture Gilmour delighting in the challenge of creating something of depth from a four-note ditty caught on his iPhone. It’s one of a few excursions into what we might still call rock, by the traditional diagnosis, freighted with backing vocals by The Liberty Choir, the robust drumming of Steve DiStanislao and plenty of space for garrulous licks.

Faces Of Stone has a faintly Parisian romanticism about it, not least because of Damon Iddins’ accordion. Framed at first by Manzanera’s acoustic guitar and then by piano and synths, it follows what becomes the pattern that unites the record’s moodswings, in building the backdrop for the artist’s still-persuasive vocals and lyrical guitar sweeps. A Boat Lies Waiting, with its keyboard moorings, is among the more Floydian moments, with rich harmonies that, you soon hear, include a return engagement for David Crosby and Graham Nash, who sang on the last solo album’s title song. Dancing Right In Front Of Me has a distinctly wistful, if-only aura of opportunities missed, with keyboard and bass lines by Gilmour himself.

In Any Tongue is the album’s darkest corner, a lyric of desolation and foreboding (‘his heart weighs more than it ever did before’), with suitably sorrowful piano and the momentous orchestration of Zbigniew Preisner.

By now the image is crystal: of a bunch of friends making their considered contributions to an LP that will go at its own pace, entirely untrammelled by expectation. On Beauty, you wait for words that never come, but it’s no less engaging for that; The Girl In The Yellow Dress is a cocktail-lounge dalliance with Jools Holland at the unobtrusive ivories, Colin Stetson’s saxophone slinking throughout, and a cameo on cornet by old friend Robert Wyatt.

After a lullaby intro, Today soon shows its hand as the muscular rock vehicle for which some devotees will have been holding the line. Not to denigrate its bedfellows, it’s the album’s most mainstream attraction by some way, with a mesh of guitar, bass and synthesizer parts wrapped around a potent hook.

The closing And Then…, again wordless, strikes a melancholy final scene, but Gilmour’s playing, as so often, finds the space between sad and inspiring. That mood lingers long after Rattle That Lock arrives home in the harbour, and if the album will never satisfy every diehard’s demands for some late masterwork of progressive peregrination, what lies within will be enough to rattle more than a few locks.