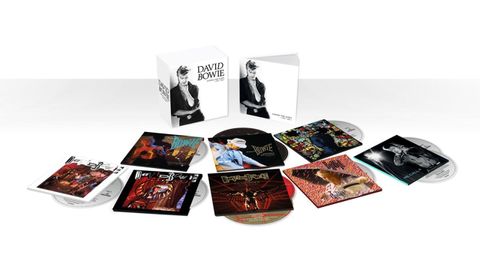 After the majestically rich glam box set, the gloriously excessive cocaine-soul period and the art-rock genius of the Berlin albums, Bowie’s 1980s reinvention as mullet-haired mainstream pop star was always going to be a tougher sell. Even Bowie himself called these his “Phil Collins years”. Padded out with uneven live albums, indifferent remixes and anodyne film soundtrack songs, this 120-track package makes for depressingly arid listening in places. That said, no anthology that includes the heart-soaring Absolute Beginners or the high-gloss Let’s Dance can be considered a total wash-out.

Bowie’s 1983 album Let’s Dance album sold a career-topping 10 million copies, transforming this former leper messiah into a stadium-rocking superstar. Nile Rodgers’s bright, disco-friendly production still divides fans, but the album endures thanks to its super-catchy singles and a handful of underrated gems, including the achingly lovely Without You and the funk-pop floor-stomper Shake It.

The key fan-bait in this lavishly packaged box set is a bold reworking of Bowie’s 1987 career nadir Never Let Me Down. A team of seasoned Bowie collaborators led by producer-engineer Mario McNulty have performed radical surgery on these tracks, replacing their booming, cluttered, heavily studio-processed production with more subtle, moody, artful arrangements.

So is it really possible to reverse-engineer a ‘lost’ avant-rock album from a lacklustre soft-rock misfire? Arguably. On the positive side, Bowie’s vocals are now generally clearer and more sympathetically framed, especially on the sweetly romantic title track. But adding discordant drones, minor-key shifts and sci-fi trip-hop rumbles to thin material like Day-In Day-Out or Shining Star (Makin’ My Love) is more cosmetic gimmick than inspired transformation. Trying to salvage Bowie’s most derided album is an admirably ambitious experiment, but low-grade source material was always going to be an obstacle. Some turds just cannot be polished.