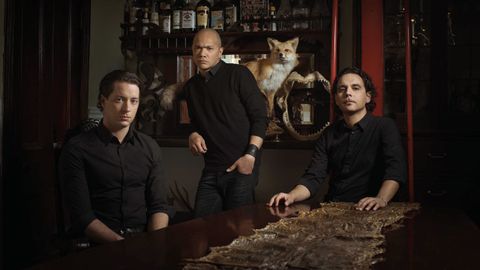 Has it really been 20 years? Two decades of laying libidinous, metaphorical pipe via the medium of hip- thrustin’ rock’n’fuggin’roll?

Like other laser-sighted members of rock’s repetition hall of fame – think AC/DC, Motörhead, Accept, even Slayer – Canada’s Mocha Moses has been juggling the same handful of chords and subject matter over the course of his career, but done enough tweaking to keep the beer drinkers and hellraisers happy and balls-deep in sown wild oats.

Wild Cat, the band’s eighth, is probably their biggest sounding album, but paradoxically, the radio-ready sheen of the Never Too Loud and Below The Belt records has been scuffed up and scuffled for a greater sonic advantage. Their ongoing references to the Stones, Van Halen, Misfits, Thin Lizzy, Hellacopters, Backyard Babies and old-school soul/R&B offer no surprises, but Let’s Start Dancing and Do This Every Night exude juke-joint energy. Nods to Motörhead’s early blues days have the title track swinging, and as if to balance out the between-the-sheets expectations of Success In Bed, Revolution (But Then We Make Love) demonstrates Danko’s unique brand of social commentary in which even those thinking with their dicks can spare enough brain blood to despise Trump-style politics.

The 10 best podcasts according to Danko Jones