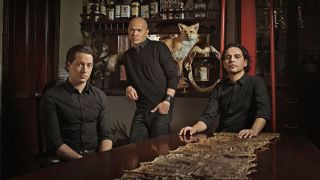 As a performer he’s been compared to “a panther on heat”. Indeed, from lo-fi garage punk origins in Toronto, Canada, Danko Jones, the frontman with the hard rockers who share his name, has grown into an entertainer of the most ferocious kind. In the process he’s sung with Lemmy, supported the Rolling Stones, written for the Huffington Post (and many others), and hosted a podcast in which he’s grilled artists like Henry Rollins and Duff McKagan.

Today, in a West London hotel, he’s softly spoken as he discusses politics, geeking out about Kiss and reflecting on a life of fire and discipline. His band’s eighth album, Wild Cat, a precision-honed display of catchy, unbridled brutality, is released this month.

You were just six when you first asked your mum for a Kiss album. What attracted you to them?

I was an only child, and they wore make-up so I didn’t know what colour skin they had, so I pretended they were my brothers. Also, they were like superheroes. You mix superheroes with loud rock music and to a six-year-old boy, that’s a real big combination.

The endearing thing about that band is not their successes, it’s all their fumbles. These guys aren’t superheroes, they’re just normal people who stumble and fall and try to be cool. They’re not necessarily cool all the time, but they’ve tried to be. That’s something that’s endeared them to me, at least.

I used to stay at the back of the class and be really quiet. I did okay. I didn’t want to get in trouble so I did all my homework, but I never excelled in any certain way.

Some people think we’re just some radio rock band without any ‘cred’ or background. But the thing is we spent five years as a garage-punk band – we didn’t put out any records at first. When we started we wanted to be like The Gories or The Oblivians. Then as we got better, we started to expand the songs, so that changed the music we were playing, because garage-punk is based on very simple structures. We wanted to make polished recordings, and we were getting better at our instruments, so it turned us, naturally, into a hard rock band.

Songs on the new record like Success In Bed and She Likes It suggest your confidence hasn’t diminished.

Success In Bed is more of an ode to how it used to be with us, lyric-wise. I haven’t written a song that’s so overconfident in a while, but the riff called for it. She Likes It, I knew people would interpret it as that, but it’s actually a response to the Ike and Tina Turner song called I Like It. That constant Jon Lord-kinda keyboard that’s on that track is what I’m trying to emulate with the constant guitar picking.

I believe in a mathematical equation that keeps everything together. I don’t really believe in a guy in slippers and a robe, some dude who looks like a mix between Axl Rose and Lemmy Kilmister.

I’m super-left. I’ve always sidestepped this issue, but over the last couple of years I’ve made my political stance a little more public. It’s crazy what’s going on in America. I can’t not say where I stand.

They’re all pretty good. I haven’t really taken a lot, so I never got to the point where they started to be bad. Smoking marijuana is fun.

You have a real literary side. Which writers do you admire?

When I was in high school I read a lot of Henry Miller. I took a lot from Lester Bangs. He was a huge inspiration in terms of rock writing, and how you can turn rock writing into literature.

In an age where people are held to account by social media, is it now more difficult to be a ‘rock star’, à la Keith Richards?

I never wanted to emulate Keith Richards. I love the music he’s made, but not the presentation. My heroes were people like [Minor Threat/Fugazi frontman] Ian MacKaye. We didn’t have this Dionysian ‘do whatever’ kind of attitude when we started, so being ‘held accountable’ on social media, I’m not scared of it. I police myself all the time, I’m my own biggest critic, and I live inside my head so much that I don’t think there’s any way I would do or say something that I haven’t already vetted myself.

Any kind of sappy one-liner looks ridiculous on a tombstone, so probably just the dates that I was born and died. Very plain tombstone too.

Wild Cat is out now via AFM Records. Danko Jones play London’s The Garage on March 15.