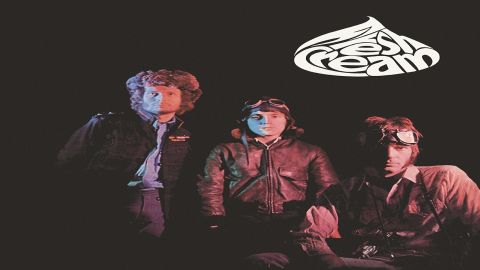 Expectations for Cream’s first album, at the end of 1966, were high within the flourishing British blues scene. Eric Clapton had already been proclaimed God while with John Mayall and both Ginger Baker and Jack Bruce had unimpeachable musical credentials, although die-hard blues fans had been somewhat nonplussed by Cream’s first two singles: the whimsical Wrapping Paper, and I Feel Free that reeked (and still reeks) of ‘Swinging London’.

Fresh Cream, however, fully justified Clapton’s description of the group: “blues ancient and modern”. There was nothing purist about Cream’s approach to the blues. Bruce and Baker’s jazzy rhythms and Clapton’s panoply of guitar tones and controlled feedback took the blues to another level, vividly illustrated by their six-and-a-half-minute version of Howlin’ Wolf’s two-and-a-half-minute Spoonful.

They never lost sight of the dynamic tension of the blues, whether racing through Muddy Waters’s Rollin’ And Tumblin’ or transforming Skip James’s I’m So Glad. They could also write their own blues – Sleepy Time Time – as well as thunderous blues-based psychedelic rockers like NSU and Sweet Wine. Indeed for all the accolades heaped upon the subsequent Disraeli Gears and Wheels Of Fire, it was Fresh Cream that provided the core of Cream’s live set, right up to their farewell concert in 1968.

So how do you turn a 38-minute album into a four-disc set? Well, you can start with the original mono mix, add the singles (which most versions of the album already do), and include some alternative masters and also several unnecessary duplications. Even more pointless is the two-part US single of Spoonful with the solo edited out.

Fortunately it gets better. Disc two has the original stereo mix, but more interesting are the new stereo mixes of seven tracks that take the mufflers off the original sound. These include unreleased versions of Rollin’ And Tumblin’ and Spoonful which will be manna from heaven for any serious Cream fan. Disc three has more unreleased out-takes and early versions including three tracks taking a closer look at I Feel Free. That’s followed by 14 BBC session tapes recorded between November 1966 and January 1967 unearthing a couple that even the Beeb couldn’t find.

Finally, for hi-fi buffs there’s a Blu-ray disc with the album in 24⁄96 Hi Resolution Audio, mono and stereo. Definitely an upgrade for those of us who first heard the album on a Dansette.